Home » Uncategorized » Will ASIC Chips Become The Next Big Thing In AI?

04 Aug Will ASIC Chips Become The Next Big Thing In AI?

When Google announced its second generation of ASICs to accelerate the company’s machine learning processing, my phone started ringing off the hook with questions about the potential impact on the semiconductor industry. Would the other members of the Super 7, the world’s largest datacenters, all rush to build their own chips for AI? How might this affect NVIDIA, a leading supplier of AI silicon and platforms, and potentially other companies such as AMD, Intel, and the many startups that hope to enter this lucrative market? Is it game over for GPUs and FPGAs just when they were beginning to seem so promising? To answer these and other questions, let us get inside the heads of these Goliaths of the Internet and see what they may be planning. 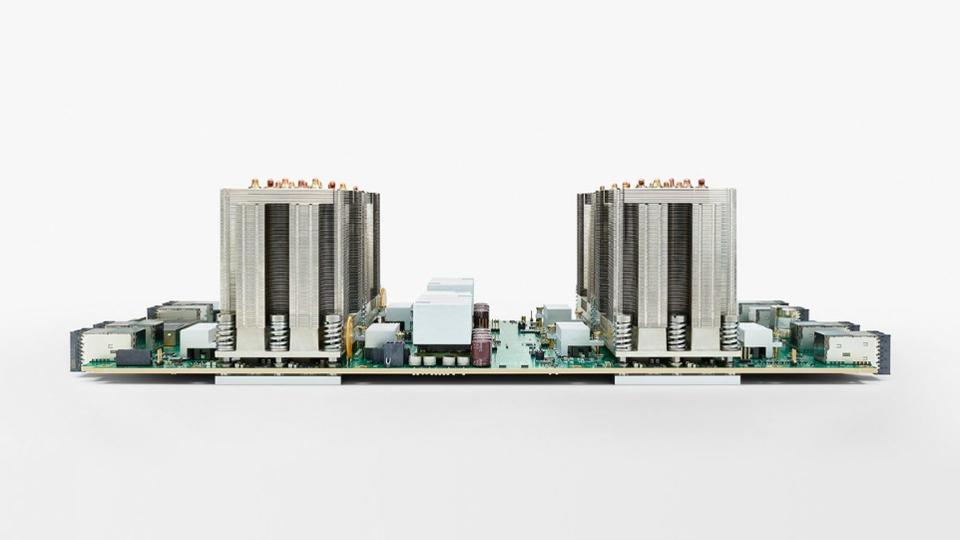 The Google Cloud TPU is a four ASIC board that delivers 180 Teraflops of performance Source: Google.

The landscape of silicon for AI

As I explored in an article earlier this year, there are four major types of technology that can be used to accelerate the training and use of deep neural networks: CPUs, GPUs, FPGAs, and ASICs. The good old standby CPU has the advantage of being infinitely programmable, with decent but not stellar performance. It is used primarily in inference workloads where the trained Neural Network guides the computation to make accurate predictions about the input data item. FPGAs from Intel and Xilinx, on the other hand, offer excellent performance at very low power, but also offer more flexibility by allowing the designer to change the underlying hardware to best support changing software. FPGAs are used primarily in Machine Learning inference, video algorithms, and thousands of small-volume specialized applications. However, the skills needed to program the FPGA hardware are fairly hard to come by, and the performance of an FPGA will not approach that of a high-end GPU for certain workloads. 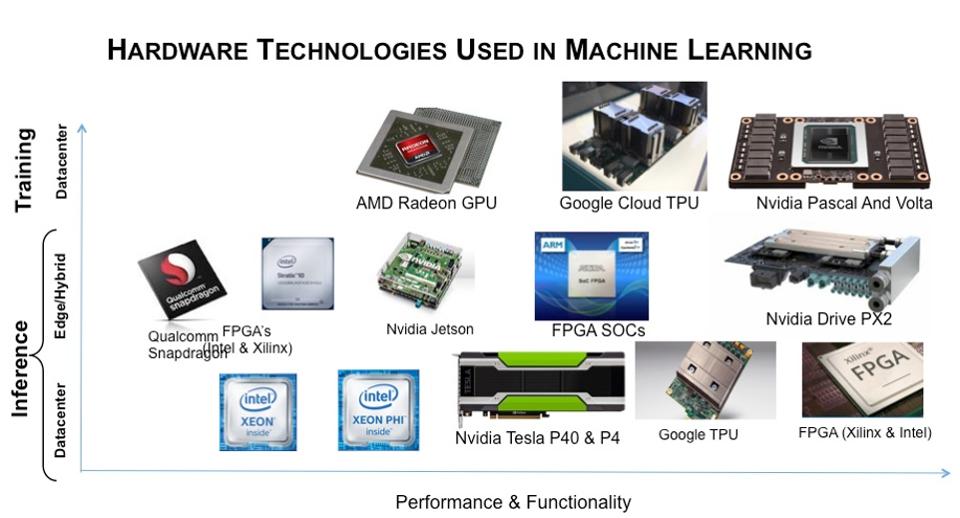 There are many types of hardware accelerators that are used in Machine Learning today, in training and inference, and in the cloud and at the edge. Source: Moor Insights & Strategy

Technically, a GPU is an ASIC used for processing graphics algorithms. The difference is an ASIC offers an instruction set and libraries to allow the GPU to be programmed to operate on locally stored data—as an accelerator for many parallel algorithms. GPUs excel at performing matrix operations (primarily matrix multiplications, if you remember your high school math) that underlie graphics, AI, and many scientific algorithms. Basically, GPUs are very fast and relatively flexible.

The alternative is to design a custom ASIC dedicated to performing fixed operations extremely fast since the entire chip’s logic area can be dedicated to a set of narrow functions. In the case of the Google TPU, they lend themselves well to a high degree of parallelism, and processing neural networks is an “embarrassingly parallel” workload. Think of an ASIC as a drag racer; it can go very fast, but it can only carry one person in a straight line for a quarter mile. You couldn’t drive one around the block, or take it out on an oval racetrack.

Here’s the catch: designing an ASIC can be an expensive endeavor, costing many tens or even hundreds of millions of dollars and requiring a team of fairly expensive engineers. Paying for all that development means many tens or hundreds of thousands of chips are needed to amortize those expenses across the useful lifetime of the design (typically 2-3 years). Additionally, the chip will need to be updated frequently to keep abreast of new techniques and manufacturing processes. Finally, since the designers froze the logic early in the development process, they will be unable to react quickly when new ideas emerge in a fast moving field, such as AI. On the other hand, an FPGA (and to a limited extent even a GPU) can be reprogrammed to implement a new feature.

Why did Google build the TPU?

If you think about Google’s business, it has three attributes that likely led it to invest in custom silicon for AI. Examining these factors may be helpful in assessing other companies’ potential likelihood of making similar investments.

Frankly, while all of the other Super 7 members (Amazon, Alibaba, Baidu, Facebook, Microsoft, and Tencent) are capable of building their own accelerator, nobody exhibits all three attributes to the extent that Google does. Furthermore, of the companies that are actually close, several seem to be moving in different directions:

I’m not forecasting that none of the other Super 7 companies will jump the GPU ship and hop on board their own ASIC, but it seems highly unlikely to me that many will—not soon, anyways. They all seem to have their hands full developing Machine Learning models with their vast troves of data, and are busy monetizing those models in a variety of products and services. Building an ASIC, and the software that enables it is an ongoing and expensive proposition that could be a distraction. Alternatively, combining the performance of a GPU for training with the flexibility and efficiency of an FPGA, for inference, also holds a great deal of promise.

So I for one do not think the GPU sky is falling, at least not in the near future.  AMD certainly believes there is plenty of demand for GPUs and is aiming their Vega technology right at it.

Posted by Karl Freund in Uncategorized , Followed with Comments Off on Will ASIC Chips Become The Next Big Thing In AI?