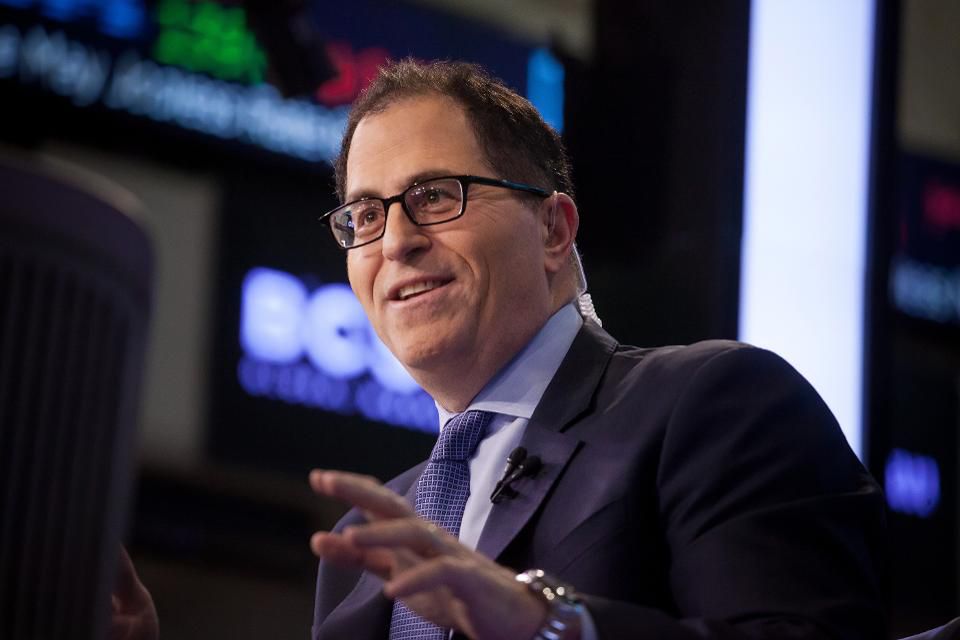 Given the recently announced Dell Technologies’ DVMT conversion planand the potential for investors to be able to invest in the entire company, I thought now would be a good time to weigh back in on the company.

Michael Dell has an amazing knack for getting it right, despite the mutterings of some naysayers with specific agendas (remember what Carl Icahn was saying about the Dell go-private deal).  Let’s take a closer look at where Dell Technologies has been and where it’s going, getting a better appreciation of where we are today and the potential for the future.

To understand where Dell is at now, it’s important to first look backwards to the 2013 leveraged buyout of the company that turned it back to a private company in the first place, before it acquired EMC.

If you can recall all the way back to 2013, there were two core beliefs that ended up being false- that all of the “enterprise applications were moving to the public cloud” and “the PC is dead.”  These falsehoods were driven by the huge growth rates the public cloud players were having and big growth in the tablet market with a corresponding, sharp decline in enterprise IT sales and PC stagnation.

7 years later, the PC is far from deadMIT   TECHNOLOGY REVIEW

While Dell knew these myths were false, the stock market did not, and Dell’s stock price and market value declined. I’m not surprised Wall Street missed this as it misses many trends, getting caught in the short-term hype.  These myths did have an air of truth to them as the enterprise did want a “cloud-like experience” but on-prem and that consumer wanted PCs with tablet-like attributes like touch-screen, app stores, instant-on, and longer battery life. Dell knew it needed to change in some big ways but correctly recognized that Wall Street wouldn’t give them the time it would take for a turnaround. Therefore, Dell went private and made some huge divestitures- its legacy services and software divisions.

To better capitalize on the “private cloud,” Dell knew it needed a bigger and more strategic set of assets. It didn’t have a cloud stack, and while it did have an enterprise storage business, it was a distant fourth place to EMC, NetApp, and HP. Dell bought EMC two years ago which brought with it a leading enterprise storage portfolio, a virtualization and future private cloud stack with VMware, a leading security company with RSA, and an upcoming private cloud app platform with Pivotal.

At $67 billion, the Dell-EMC combination was the largest tech deal in industry history. Mergers of this magnitude are notoriously hard to pull off and most had failed, as I lived through. The same cast of characters came out of the woodwork to throw stones and talk about how “doomed” the Dell EMC combination was given the amount of debt.  However, thanks to the leadership and a well-conceived integration process, it went off with few if any unexpected issues. I wrote here about the Dell-EMC merger and the herculean integration effort about a year ago.

One year after the merger, 91% of customers surveyed believed that Dell EMC had delivered on its pre-merger promises—perhaps the most telling metric of all.

So how are things going? Overall, Dell Technologies has made considerable progress paying down the debt it incurred from the deal and has gained market shares in PCs, servers, HCI, storage, software-defined networking and more.

The company announced at a recent financial analyst and potential DVMT investor event that it is in the early stages of a gigantic technology-led investment cycle and is poised to capitalize on the industry’s projected half a trillion-dollar TAM increase ($3.1T-3.6T) over the course of the next 5 years. It believes this opportunity is driven by the growth of big data, and the associated fields of artificial intelligence, machine learning, and IoT. All of this makes perfect sense to me, and it would be hard for anyone to argue this isn’t true.  The only thing up for debate is the “when,” “how big is the market exactly,” and “how much does Dell Technologies get?”

How that 5G/AI/IoT data virtuous cycle equates to IT spend.   DELL

Dell Technologies is currently looking well-positioned for this virtuous cycle and showing growth across its family of businesses. Over the past 12 months, Dell reported it had generated $86.8 billion in non-GAAP revenue, $10 billion of adjusted EBITDA, and $8.5 billion in cash flow from operations. The company boasts number one status in some of the largest sectors—the $76 billion x86 server sector, the $26 billion enterprise storage sector, and the $189 billion client sector, to name a few.

Dell Technologies by the numbers.   DELL TECHNOLOGIES
In the PC and accessories business, CSG, the last 12 months have seen revenues of $41.7 billion, growing 14% in Q1 and 13% of Q2. This makes Dell number one in PC revenue, and as it is focused on commercial markets and the high-growth gaming market, it’s number one in profits. According to IDC, Dell holds the number one unit

market share position in workstations, gaming, and flat panel monitors. Overall, its global PC share is huge—18.2% of the total market, and 22.8% of commercial PCs.

Looking to Dell’s ISG (Infrastructure Solutions Group) business, Dell reported $34.4 billion worth of revenue for the past 12 months, with $3.9 billion of operating income. The company’s ISG business grew 25% in Q1 and 24% in Q2. It claims the leadership position based on IDC and Gartner figures in external storage, data protection, converged infrastructure, hyperconverged infrastructure, x86 server units and revenue, and mainstream server units and revenue. Storage was looking challenged for a few quarters, but it appears that ship has “righted” under the leadership of Dell Technologies vice chairman and new head of all products, Jeff Clarke.

VMware is also cooking with gas, showing $8.4 billion in revenue and $2.8 billion in operating income over the last 12 months. VMware boasts the number one position in virtualization and cloud infrastructure and is also excelling in the software-defined data center, networking, software-defined WAN, and end-user computing.

What investors had previously failed to appreciate about VMWare was the strength of on-prem demand (easy to miss) and VMware’s ability to pivot to a software-defined private cloud stack. Ironically, VMWare has positioned itself as a leading enterprise cloud stack (if not the leading) after years of being positioned into a legacy, virtualization-only play. It was easy to miss (I did) as OpenStack looked hot and on the HCI-front, Nutanix was killing it, which looked like VMware could be on the outside, looking in. Heck, VMware leads in HCI and SDN ports- seriously, who would have thought?

It’s not all chocolate, cherries, and champagne. VMware still needs to fully take advantage of, and benefit from, containers, Kubernetes, IoT, and potentially stave off the recent IBM-RedHat combination, but I’m certainly not betting against the company. People who have bet against VMware the last five years have ended up being very wrong.

Finally, when Dell merged with EMC, many were concerned about the massive debt the company would take on from the deal. The company has managed to pay down $13.7 billion over the past couple of years, with plans to put down another $800 million before the end of this year. Don’t get me wrong, people were right to look into it, but in true form, Dell under-promised and over-delivered. 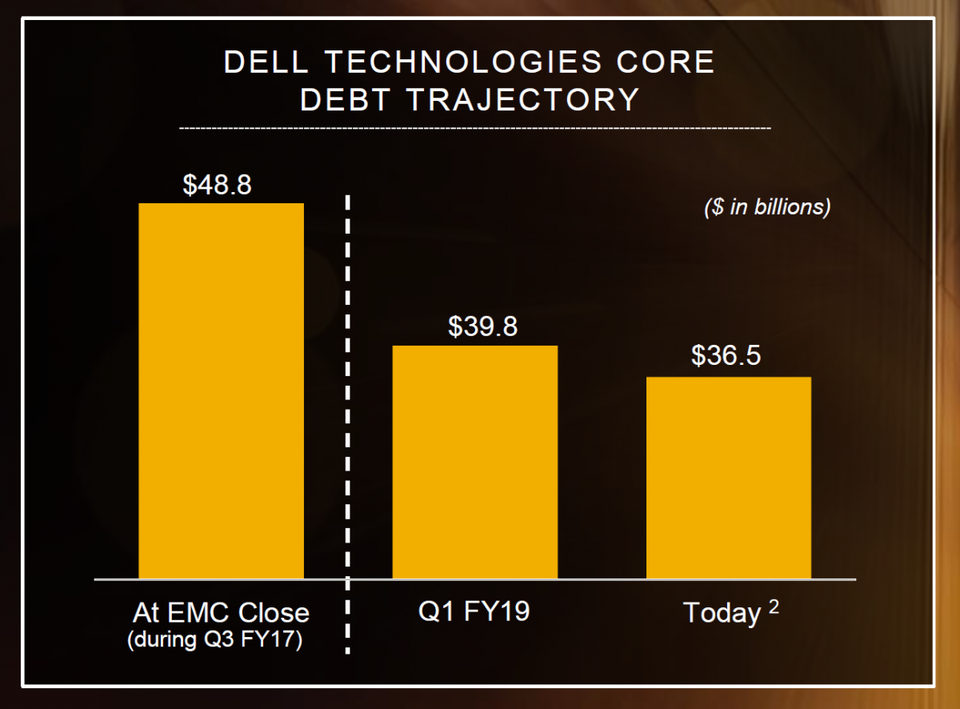 In short, I currently see Dell Technologies firing on all cylinders across its family of businesses and showing very real growth and profitability. Dell knows how to successfully change as demonstrated by its initial go-private move, spinning-off of legacy or non-strategic businesses and its successful merger with EMC. With regards to Dell plus EMC, I have to say I haven’t seen a more successful mega-merger. I personally experienced the failed AT&T-NCR acquisition and had a front-row seat for the Compaq-HP merger, and Dell-EMC had a very different outcome on a very different timeframe. Aside from some macroeconomic change, it’s not very smart to bet against Dell Technologies right now, as the ones who did many times before looked very foolish.

Note: Moor Insights & Strategy writers and editors may have contributed to this article.

Posted by Patrick Moorhead in Corporate , Followed with Comments Off on Stop Betting Against Dell’s DVMT Conversion- You Look Foolish