After recent conversations with Ayla Networks, I’m wondering if the “big dog” IoT Platform players, like PTC Inc.’s Thingworx, Cisco Systems, IBM, Zebra Technologies Corporation, etc., are really the ones to be watching when thinking about IoT platform technology.

In a discussion early this year at the IoT Global Innovations Forum, an IoT industry consultant remarked that at his last count there were more than 160 different players calling their end products “IoT platforms”. Personally, in the last few months I have averaged a briefing a week from companies that consider themselves IoT platforms. Considering the market, I’m not surprised by the “160” number, and I would bet it has grown considerably since the April discussion.

With no standard definition, IoT platforms I have seen typically include some combination of: 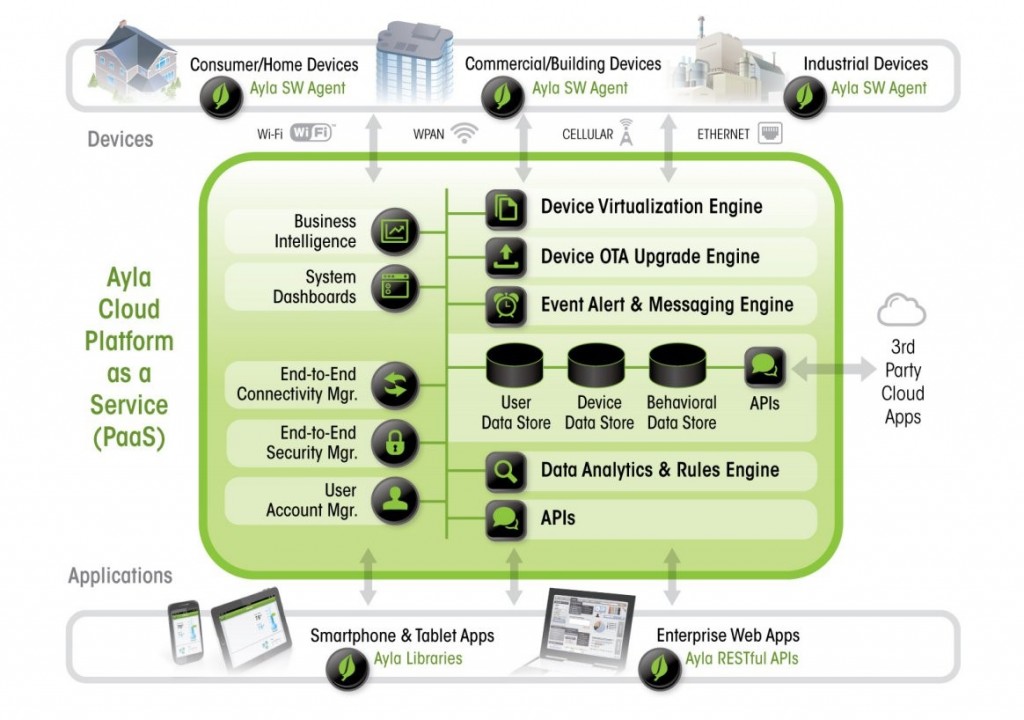 With such a large number of end applications to target, and such broad technology and data needs in terms of the platform, the number of players is not surprising. Larger companies do it all, and smaller companies are specializing in pieces, verticals, and some are attempting the whole platform to compete with the big boys. Smaller players, none of which are household names (e.g. Arrayent, Ayla Networks, Blue Pillar, GOFACTORY, LogMeIn (Xively), RTI, and Silver Springs Networks), all want a piece of the IoT platform business. In the technology world, we have been down this path many times before (think internet bubble) – huge pie promising huge revenues with a massive amount of players. For the smaller players to survive, they must have a real competitive advantage.

For IoT platform vendors, competitive advantages come in a variety of shapes and sizes. Some find these in specific verticals where they tailor their solutions to specific application segment, define and deliver a very specific product and then put their heads down and sell, sell, sell into that segment. Others believe that customers only want a single vendor, so producing and selling a more generic, but complete solution is their advantage. Some may try a different path by leveraging partnerships with leading-in areas that complement their solutions.

When I look at IoT platforms with real competitive advantages, I find Ayla to be a serious player. For those unfamiliar with Ayla, Ayla is a B2B Platform-as-a-Service (PaaS) vendor providing a solution targeted initially at HVAC, fire and safety, appliances and lighting. By primarily focusing specifically on the consumer segments, Ayla looks like they could have a specific competitive advantage in those markets. However, the specific market they serve is not what interests me the most about Ayla.

What is unique about Ayla’s solution is not the specific market or technology, but the way they have leveraged their technology to give them not only a technological/ease of use advantage, but also a regional advantage – which really counts, since that region is China.

Ayla’s first advantage comes in the form of a virtual agent delivered to silicon manufacturers. Broadcom, Qualcomm, Marvell Technology Group, STMicroelectronics and NXP Semiconductors all have products with the Ayla virtual agent embedded on-chip, i.e. you buy from these vendors an Ayla-specific version of the communications controller. This provides a huge advantage to IoT endpoint manufacturers. They buy a chip, embedded it in their system and it will immediately connect to the Ayla platform. No resources needed for software or hardware design, built-in security, and no need for a smart gateway to provision and control the device. Quick, easy and withno cost associated with connecting to the IoT platform.

The second Ayla advantage is China. We all know that China is going to be a huge market for IoT platforms, but getting in and servicing the market is always difficult. Ayla has solved this problem by becoming licensed to serve as an Internet Content Provider (ICP) in the People’s Republic of China–one of the few, if not only U.S. platform company (so far) to be granted this license. As a licensed ICP, Ayla can collaborate with other IoT players and work towards a China-wide IoT platform, where other vendors cannot or are prohibited from working.

With some key advantages over other players, Ayla looks to me to be a company that should seriously be considered a player with the “big boys” of IoT. Oh, and did I forget to mention that one of Ayla’s investors is Cisco Systems?…Hmmm.