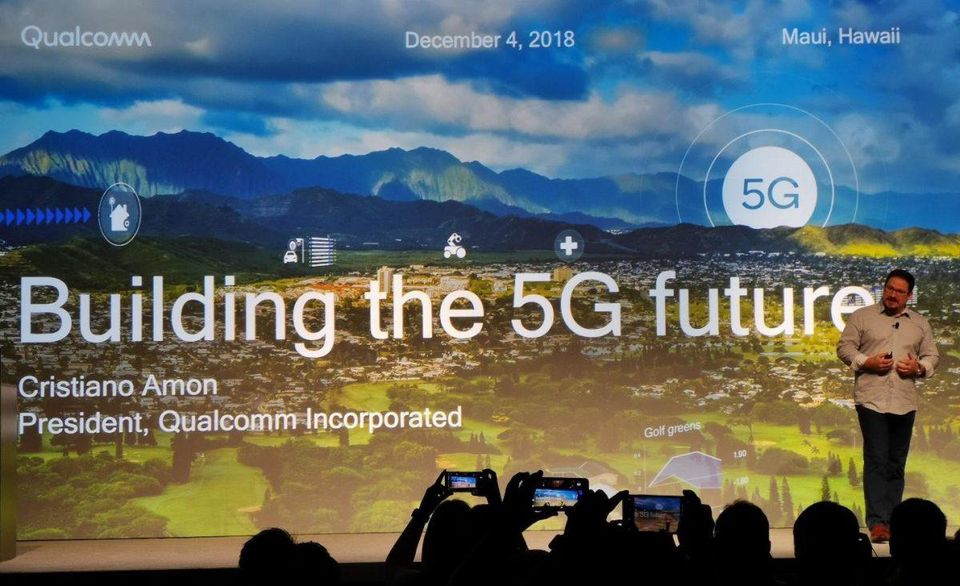 I spent last week in Maui attending Qualcomm’s annual Snapdragon Technology Summit with my colleague and analyst, Anshel Sag. It was a tough assignment in Hawaii, but someone had to do it. I attend about fifty events per year, and the Snapdragon Summit is right there at the top- not just for the location, but for the unique announcements, demonstrations, and executive access.

Mobile 5G was certainly front and center of the narrative, and the company spent considerable time at the conference enumerating the ways Qualcomm is accelerating the next generation of mobile and PC technology towards commercial reality.  As I have said before, Qualcomm is the mobile conductor of 5G, and this event reinforced that opinion. The stars of the show this year were undoubtedly the latest addition to Qualcomm’s Mobile Platform Series, the Snapdragon 855, and the latest ACPC platform, the 8cx. Let’s take a closer look at the 855, and I will cover the 8cx in my next blog.

The Snapdragon 855 is the first commercial mobile platform to support multi-gigabit 5G. To accomplish this, Qualcomm pairs the 855 with the discrete Snapdragon X50 5G LTE modem, which supports both Sub-6GHz and mmWave frequency bands. In addition to the easy to understand benefits of enhanced smartphone speeds on today’s use cases, Qualcomm focused on the responsiveness the 855 with the X50 modem brings to the platform to make it well-suited for the high data demands of cutting-edge use cases such as multiplayer VR, AR, and video collaboration.  Both Samsung, Verizon, and AT&T all had numerous demonstrations showing the benefits of mobile 5G.

I expect for 5G phones and services to be sold and operational in Q1 2019. I expect every premium Android handset to have a 5G variant in Q3 2019. For those scoring at home, this will likely be 18 months before Apple integrates 5G into the iPhone in September/October of 2020. Obviously, those Android smartphone vendors can and should differentiate themselves from the iPhone with 5G. As for service, let me use AT&T as an example. AT&T’s Kevin Petersen said the company will already have installed 5G networks in 12 cities in 2018 and in 2019 plan to have mobile 5G service in 19 cities. BT’s Fotis Karonis announced that BT would have 5G in 16 cities in the UK in 2019.

In addition to the X50 pairing, the 855 also includes a built-in Snapdragon X24 LTE modem for 2-gigabit download 4G connectivity. The 855 is a leader when it comes to Wi-Fi too, featuring Qualcomm’s Wi-Fi 6-ready mobile platform (industry-first), and mmWave Wi-Fi, via the company’s 60GHz Wi-Fi mobile platform, which Qualcomm says can achieve speeds of as fast as 10Gbps. 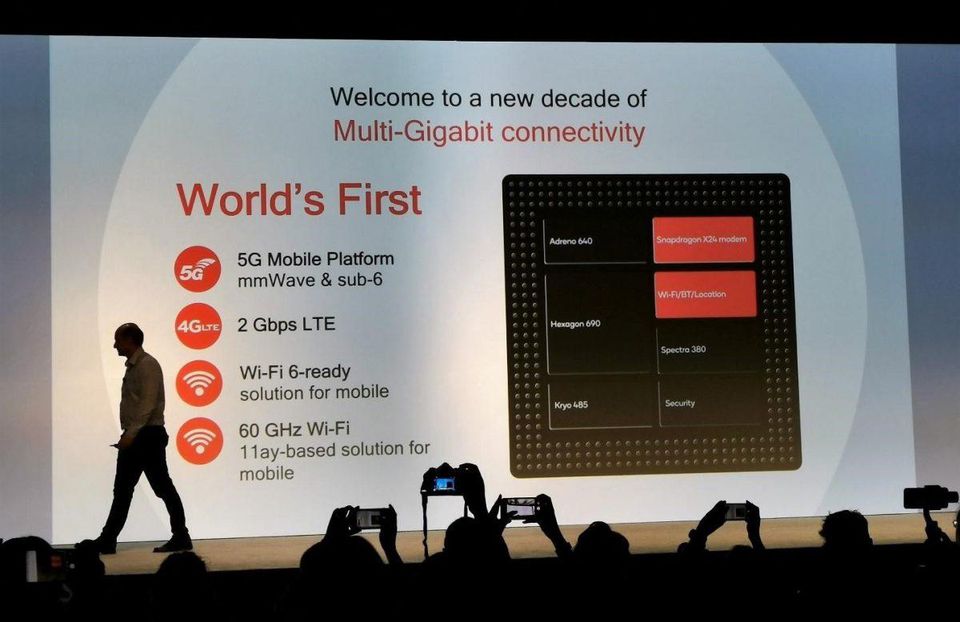 When it comes to connectivity, I believe nothing will rival the 855 when it launches.

Then, of course, there’s the CPU and GPU performance. The 855 features Qualcomm’s Arm-based Kryo 485 CPU, which the company says delivers as much as a 45% performance boost over its previous generation flagship offering. The Kryo is a performance-modified Arm A76-based design with special sauce in the form of unique caches and clocks.  Meanwhile, the 855’s Adreno 640 GPU gives the 855 a 20% boost in graphics over its predecessor. 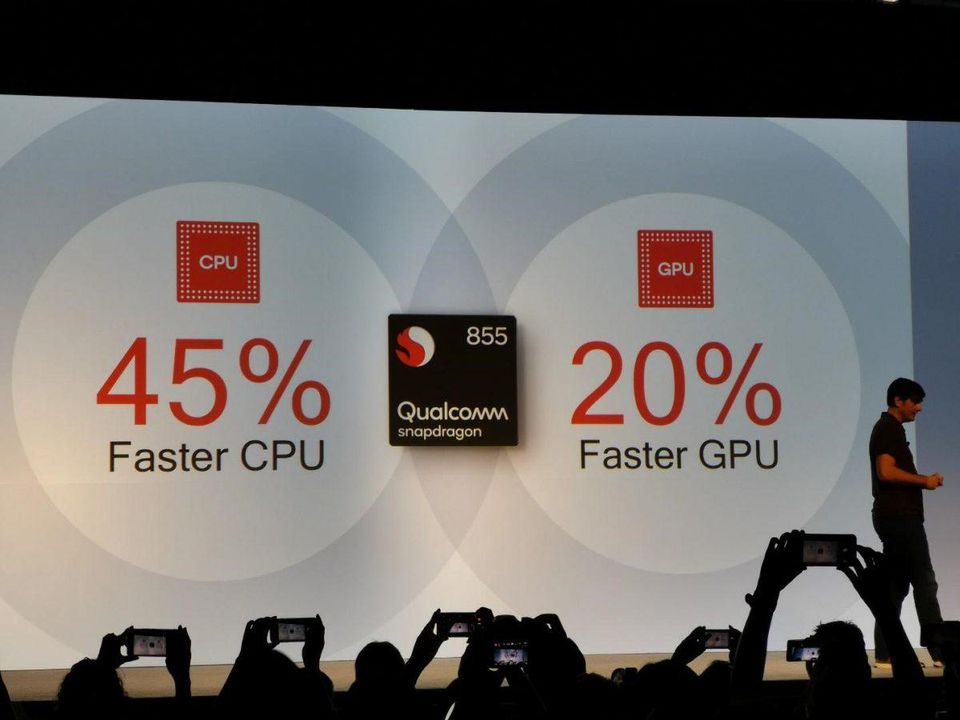 The Snapdragon is a big CPU and GPU performer PATRICK MOORHEAD

My take? Qualcomm is back to beast mode with its CPU, with the biggest performance jump we’ve ever seen from the company. I had been a bit harsh on the ST CPU performance spread between Kryo and Apple AXX-class processors, and I believe Qualcomm will significantly narrow the single threaded lead, maybe even win on multi-threaded performance. Don’t forget, Apple typically has around 20% more die area invested into the SOC (CPU-GPU-NPU-DSP-memory controller), so this would be an absolute feat of Qualcomm engineering. On the graphics side, Adreno is always a mobile leader in one way, shape, and form, and 20% is not an insignificant jump itself.

The 855 also promises to further enable AI applications, with its 4thgeneration multi-core Qualcomm AI Engine. Qualcomm says the engine is capable of more than 7 trillion operations per second, 3X the AI performance of the last generation (845) and 2X the performance of the nearest competitor (assuming Huawei Kirin). The platform features a Qualcomm Hexagon 690 Processor, which boasts the new Hexagon Tensor Accelerator and four Hexagon Vector Extensions. This doubles the vector processing of the previous generation. The Kryo 485 and Adreno 640 have also been optimized to further accelerate AI performance. The engine’s software suite looks solid, with updates and improvements to its Neural Processing SDK, Google’s Android NN-API, and both the Qualcomm Math Library and Hexagon NN. 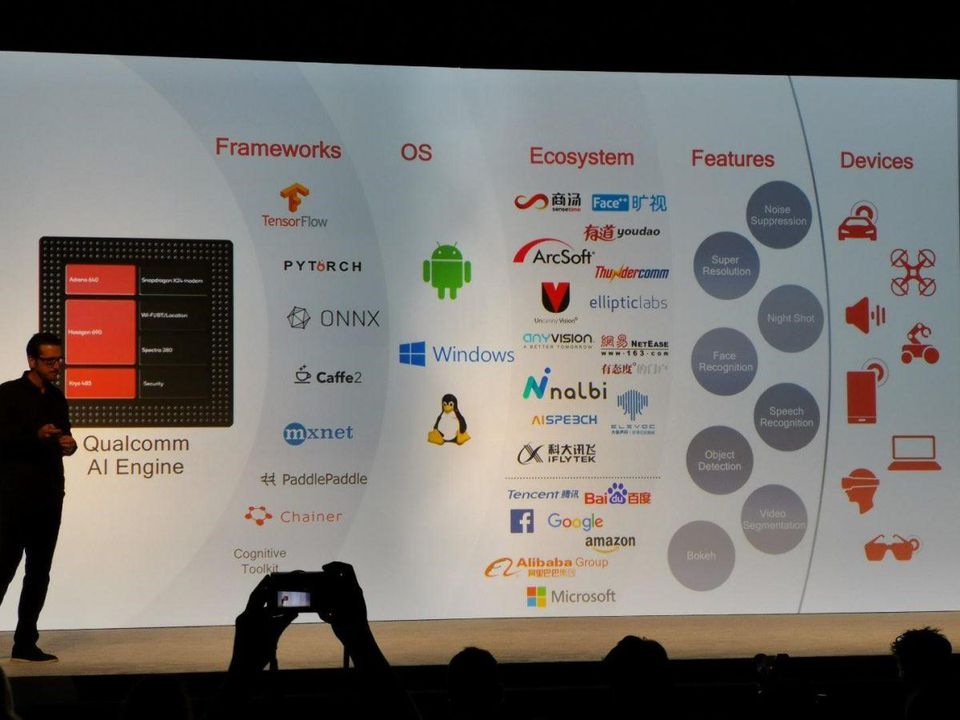 Some of the AI demos blew my mind. Super-resolution of garbagy photos and the elimination of background noise on a call were my favorites, and I hope handset manufacturers integrate these features. In my opinion, this is the best machine learning showing yet for Qualcomm. The platform has general ML compute when you need, it, specialized ML compute when you need it, and a single API. I think the 855 is going to do wonders in mobile ML.

The 855 comes with a slew of camera improvements, thanks to its new Spectra 380 ISP. Most notable in my opinion are the integrated computer vision capabilities. The 855 features the world’s first CV-ISP—essentially adding compute to the ISP to add performance and removing latency. This enables hardware-based depth sensing, which in turn enables impressive capabilities like video bokeh, background object replacement, and cinemagraph.

There were so many 855 camera capture improvements unveiled at Snapdragon Summit that I honestly had trouble keeping up. This bodes very well for next year’s flagship Android phones if those vendors integrate the features.

When it comes to the platform’s entertainment capabilities, there was another whirlwind of new features to digest. Called “Elite Gaming,” the 855’s Adreno GPU promises to deliver “a new level of realism” for gamers, with support for many features including true HDR gaming and physically based rendering. This basket should reduce latency and deliver incredibly smooth gameplay, with algorithms capable of reducing dropped frames by more than 90%. 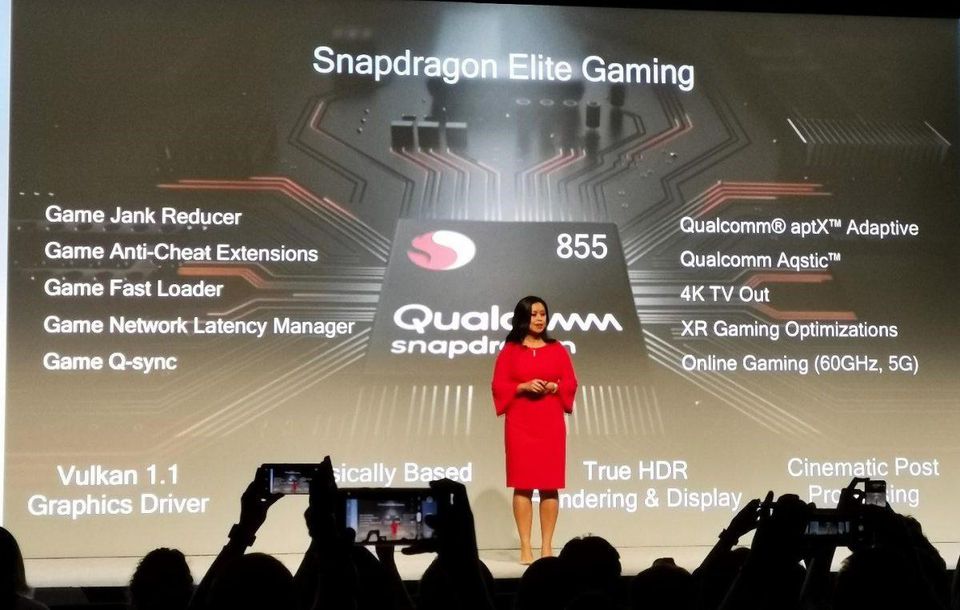 For video and movie lovers, the platform enables HDR10+ capture and playback (which has never been done before on mobile) and features higher energy efficiency (more playback on a single charge). As I mentioned earlier, the 855 also seeks to enable immersive technologies like VR—it enables volumetric VR immersive video at 8K resolution. This very well could be the breakthrough that VR needs to drive it more into the mainstream.

Customer support at the show

The largest smartphone maker in the world, Samsung’s Justin Denison announced they would be releasing a 5G phone with the Snapdragon 855. Motorola also showed off its recently announced 5G Moto Mod at the show. 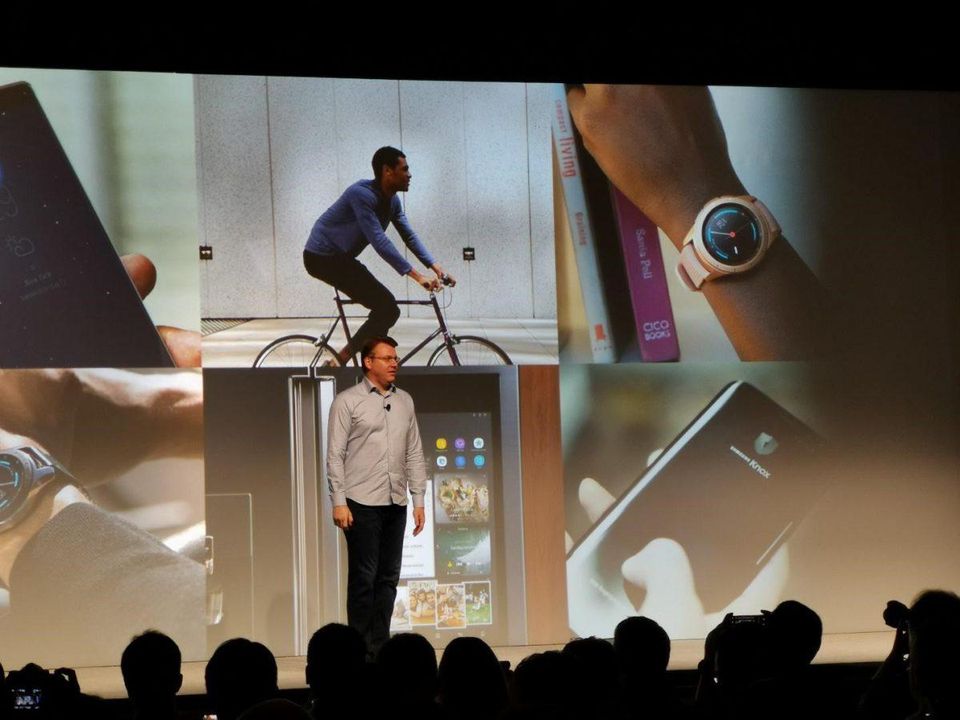 We also learned at the summit that Qualcomm is already collaborating with major Chinese OEMs (OnePlus, Xiaomi, OPPO, Vivo, and ZTE), as well as the China Mobile Communication Group Device Co. Ltd., on the development of new 5G mobile devices based on the new Qualcomm 855 Mobile Platform. OnePlus CEO Peter Lau made a stage appearance in Maui to announce it will have a “2019 Flagship” and would be among the “first to feature the Qualcomm Snapdragon 855.”

Don’t think for a second this will be the extent of customer support it for the 855. At CES and MWC, both shows I will be attending, I am expecting every single Android premium handset vendor to announce a premium Snapdragon 855-based handset. 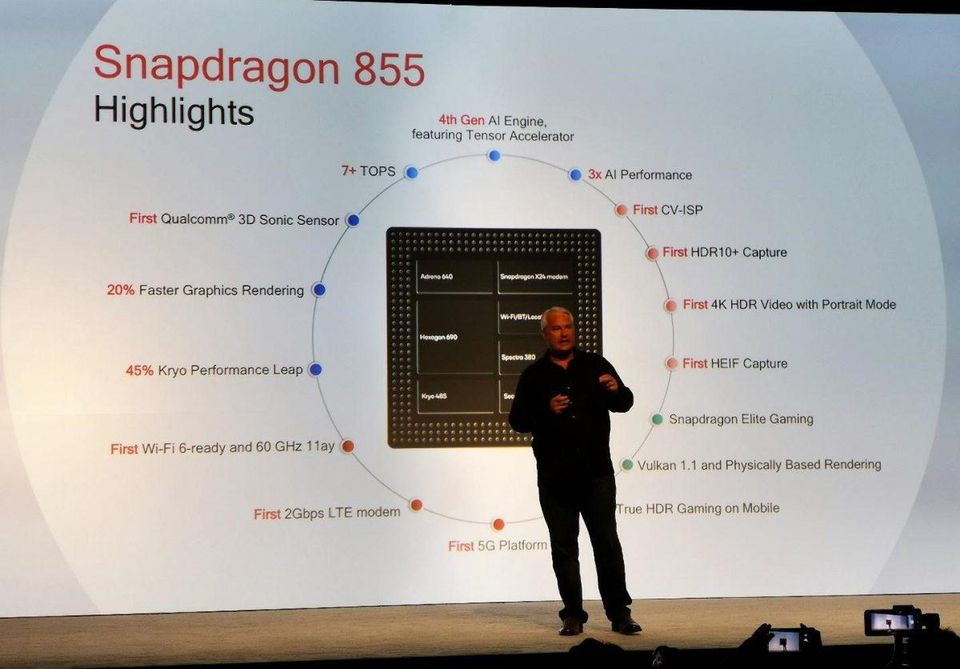 I believe this is the strongest Qualcomm mobile offering I have seen in 5 years—and during a challenging time (Broadcom-NXP-Apple-restructuring-government agencies), to boot. This reinforces Qualcomm is an execution machine. Imagine what it could do if it didn’t have the distractions? All of this 855 goodness will benefit users, and Android handset manufacturers as the new chipset will help differentiate versus both Apple and Huawei.

Note: Moor Insights & Strategy writers and editors may have contributed to this article.

Posted by Patrick Moorhead in 5G, Smartphone, Uncategorized , Followed with Comments Off on Qualcomm Differentiates Itself And Smartphone Partners From Apple And Huawei With The Snapdragon 855