Judging by the huge response that I got to my AirTV review several weeks ago, there’s no question that a lot of mainstream consumers are chomping at the bit for products and solutions that allow them to sever their relationship with their cable and satellite companies. AirTV is one great way to access local Over-The-Air (OTA) channels for free, giving users the ability to stream content throughout the home and to their mobile devices on-the-go. Today, however, I wanted to take a look at Plex—a Bay Area startup which utilizes an ambitious software-based approach to capture OTA channels, stream them to various devices, and a whole lot more.

For several years, Plex’s Media Server software has gained popularity by allowing you to organize literally every type of media file (videos, music and photos) that you have on your home computer, in the cloud, and/or on external drives, and stream it to just about any other type of client device, including gaming consoles. In a nutshell, you can stream all of your media anywhere you go and on all the devices that you use.

How does cord cutting play into this? Well, the Plex Media Server software also allows you to integrate an external TV tuner (connected to an antenna) so that you can access your live OTA TV channels.  While this review will focus mostly on the OTA TV channel capability, the Plex solution is essentially a home entertainment “server” on steroids, with capabilities well beyond AirTV’s focused ability to capture and stream live OTA TV channels.

How does Plex work?

The Plex product consists of two software apps: the Plex Media Server app, is downloaded to your Windows or Mac, and organizes your media across your home network. The “basic” version is free and allows you to, among other things, stream your photos, videos and music to just about any device you can think of—Amazon Fire TV, Apple TV, Roku, Google Chromecast, Android, TiVo, Windows PCs, Macs, Android/iOS phones and tablets, and more.

The basic free version has another handful of capabilities that I won’t go into, but Plex’s premium paid version is where the rubber really meets the road. Called Plex Pass and priced at $5 per month (or $40 annually), the premium version allows you to watch live TV with the purchase of an external TV tuner and an antenna. What’s more, the premium version includes Plex DVR, which allows you to record broadcast TV channels to your PC or Mac so that you can stream recorded content anywhere in the world with a Plex-enabled client device. Additionally, the Plex Pass subscription offers robust program guide support (based on your zip code) so you know which program content is being broadcasted in your area. An added bonus—the guide also details show and series descriptions, so you know exactly what you’re getting into.

Another very cool feature—just like a cable or satellite-based DVR, Plex’s live TV functionality offers “time shifting” capability, with play, pause, rewind and fast-forward controls. This allows users the option to replay critical moments in a TV program (or duck out for a bathroom break). Keep in mind, though, that this recording capability is limited to your OTA channels. 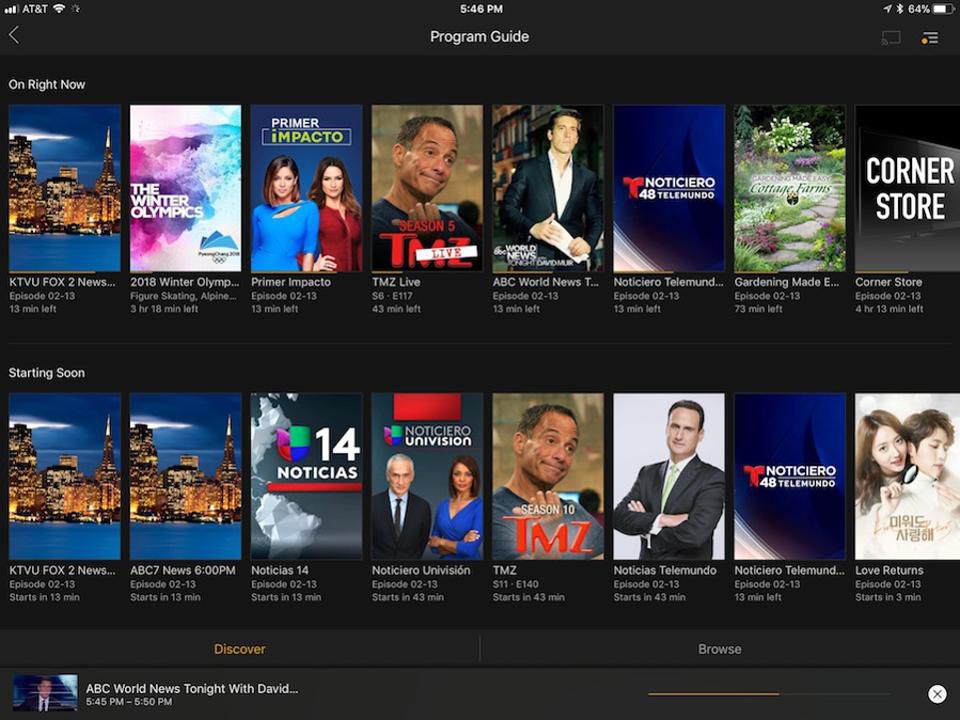 One of the areas that Plex clearly shines is its user interface, which I consider one of the best I’ve seen.  The client app interface in the Program Guide is highly visual, showcasing large linear thumbnails about what programs are being currently broadcast live, what programs are starting soon, as well as what episodes are new and upcoming sports and movies programs. This is particularly useful for large living room entertainment setups.

I did, however, find the initial installation of the Plex Media Server software on my Apple iMac to be a bit complex for the average, mainstream consumer. While the installation of the server software was fairly seamless and issue-free, I was a bit overwhelmed by the sheer number of options that you can tweak to optimize performance. You do have to tell Plex which folders on your PC you’d like it to access, so it really helps to have the folders organized by media format types.  The Plex software extracts the information it can and will logically organize the files by metadata tags.  For music files, the Plex software extracts artwork like album covers—useful for faster file identification and more attractive menus.

I was pleased that my Silicon Dust HD HomeRun Connect Duo TV tuner was immediately discovered by the Plex software, and it only took a few minutes for the Plex software to scan for the available OTA channels in my area. I was able to get strong signals for 30 channels (10 in HD resolution) with the $29 RCA amplified indoor flat antenna. Side note: One potential downside to using the HD HomeRun Connect Duo tuner is that it requires an Ethernet connection for access to your home network, meaning you’ll need to have a router or wireless extender close by. AirTV, on the other hand, avoids this since it can access networks wirelessly.
Acceptable—not perfect—streaming performance

Plex boasts that its software-incorporated technology provides good performance without requiring a dedicated transcoder (typically integrated with the TV tuner). While users’ mileage might vary (as overall performance will always be a function of the bandwidth that you enjoy in your home or office), I found the video streaming to be acceptable but not perfect. I did not experience the snappiness I enjoy with AirTV, which does have a dedicated hardware transcoder. Watching video via Plex was certainly enjoyable, but I did experience a 3-5 second lag when accessing an OTA channel.

I’d strongly encourage purchasing an external TV tuner; there are number of them on the market that include integrated transcoder capability for optimizing video performance. You can change some of the settings in the server software to optimize video performance, but that comes at the expense of using CPU resources on the home computer where the server software is installed. This could could slow things down for anyone using the computer at the same time.

One feature I appreciated was that while accessing a local news channel with Plex on my Apple iPad, I was able to minimize the app and listen to the audio while reading the Wall Street Journal. This doesn’t sound like a critical feature, but I’m sure some commuters would enjoy being able to listen to their local news and multitask on the way to work.

It should be noted that AirTV and Plex require you to “hop out” of their apps to access OTT streaming apps like Netflix, Hulu and others. AirTV does a very nice job of recognizing Sling TV channels and OTA channels in the Sling TV app, but Plex’s software only recognizes available OTA channels and any “plug in” online channels (e.g. Ted Talks, NPR, Comedy Central) that you install.

This review only skims the surface of what the Plex software has to offer from a functionality standpoint—it is truly an ambitious platform in concept. It integrates local live TV channel content in a unified, intuitive manner and throws in strong multimedia management to boot—all with a beautiful interface. I think Plex could streamline and simplify the installation process a bit for the casual user, but that is a small quibble considering the many good things Plex brings to the table. All in all, Plex’s software solution is another great way to cut the cord from your cable or satellite provider. Check it out—you won’t be disappointed.

Posted by Mark Vena in Connected Home , Followed with Comments Off on Plex Software Review: Cut The Cord And A Whole Lot More