Osterhout Design Group (ODG) announced with Qualcomm that they would bring two new headsets to the market that are capable of both AR and VR. Both the ODG R-8 and the ODG R-9 head mounted displays (HMD) feature Qualcomm’s latest flagship system on a chip (SoC), the Snapdragon 835. While I have not had a chance to try out the ODG R-8 or R-9 yet, I have had opportunities to try the prototype that are both based upon. I have been bullish on ODG since the company announced their Horizon prototype which the ODG R-9 is based on. This is in addition to the fact that ODG just received $58 million in in December in Series A funding led by 21st Century Fox, which makes sense since the company appears to be preparing to launch their first consumer product in the ODG R-8. They also recently signed an agreement with China Mobile’s MIGU, the largest carrier in the world with 840 million subscribers, to be an exclusive distributor inside of China. 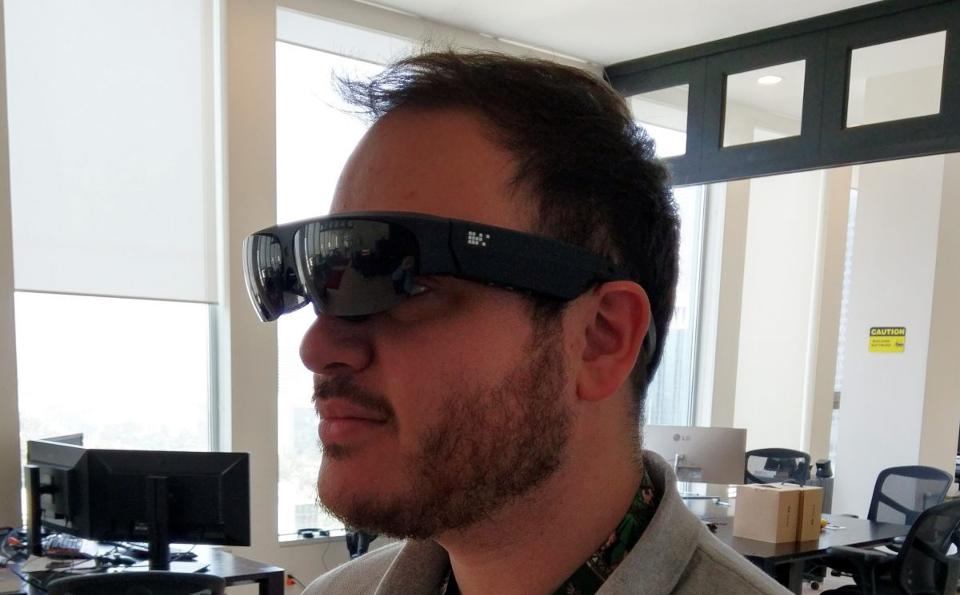 The ODG R-9 is the company’s flagship device which features the same optics as the Horizon prototype that I have been impressed with ever since I saw it with OTOY’s light field content in June when it was unveiled. I am impressed with the R-9, because it feels like such a leap in improvement of technology over the previous generation and many other current technologies. Most of the AR headsets I have seen, including the Hololens and Meta2 generally have narrow field of view (FOV) compared to VR headsets and lack visual fidelity. Even with all that praise, the ODG R-9 does still have a relatively narrow FOV at 50 degrees, while the R-8 has an even narrower 40 degree FOV compared to VR headsets but is still much better than Microsoft’s Hololens.

The Meta2 AR glasses on the other hand have a much wider 90-degree FOV but do not have as high  resolution as the ODG R-9 which produces 1080p per eye. This means that the ODG R-9 has a higher pixel density and visual fidelity; having tried both, I can confirm the ODG R-9 is clearer and sharper. The Meta2 glasses are not entirely comparable to Hololens or ODG’s R-9 glasses, because they still require a computer connection and do not have their own integrated compute for mobile use. The ODG R-9 also has a competitor in Magic Leap’s AR glasses. Those appear to have a separate compute and battery pack attached via cable and aren’t as comparable as Microsoft’s Hololens but are still more comparable than Meta2. While I have not tried the R-9 yet, I have tried the Snapdragon 805-based prototype which didn’t have a lot of the features that this final Snapdragon 835 version did including 6-DoF tracking using the Snapdragon 835’s inside-out tracking.

In addition to the ODG R-9 is the ODG R-8. ODG has been a leader in heads up displays and holographic displays for the US military and other enterprise applications. The ODG R-8 is the company’s first consumer product and will likely sell for less than the high-end R-9, which is likely going to be targeted towards enterprise and industrial applications. The ODG R-8 won’t necessarily be too much of a downgrade from the R-9 in that it will still sport a zippy Snapdragon 835, but it will have a narrower 40-degree FOV compared to the R-9’s 50-degree FOV. However, this is still wider than the Microsoft Hololens’ 30 degree FoV which is still fairly limiting.

ODG’s headset is interesting, because it was the first I tried that blurred the lines between AR and VR and convinced me that eventually most headsets will be some sort of mixed or merged reality. Other headsets mostly functioned as either AR or VR headsets, but ODG’s R-9 has blurred the lines in a meaningful enough way to see how users might transition from one to the other or exist in some sort of Mixed Reality. I would love to see the ODG R-9 and R-8 support both Google Daydream and Google Tango, but realistically the hardware right now is limited, and it may be some time until we see Tango in something like an ODG R-8 or R-9. Companies like Microsoft need competition from the likes of ODG, and it is good to see some of the AR headset prototypes finally reach commercialization. While we don’t yet know what companies like Apple are planning, it seems like 2017 is going to be the year of VR and AR…or something in-between.