NVIDIA has been teasing the promise of Pascal for years, but this year Pascal’s performance became much more real. With the announcement of the Tesla P100 based on Pascal, NVIDIA was able to show the neural-network world what Pascal was really capable of. However, that chip is very different from the gaming-focused Pascal chip that NVIDIA launched on May 6th in Austin at an event VR analyst Anshel Sag and I both attended. NVIDIA introduced a plethora of new features and improvements that enable their new Pascal-based GeForce GTX cards to really shine against the competition. NVIDIA’s own Founder and CEO, Jen-Hsun Huang, deemed the GTX “1080 is the new King.” 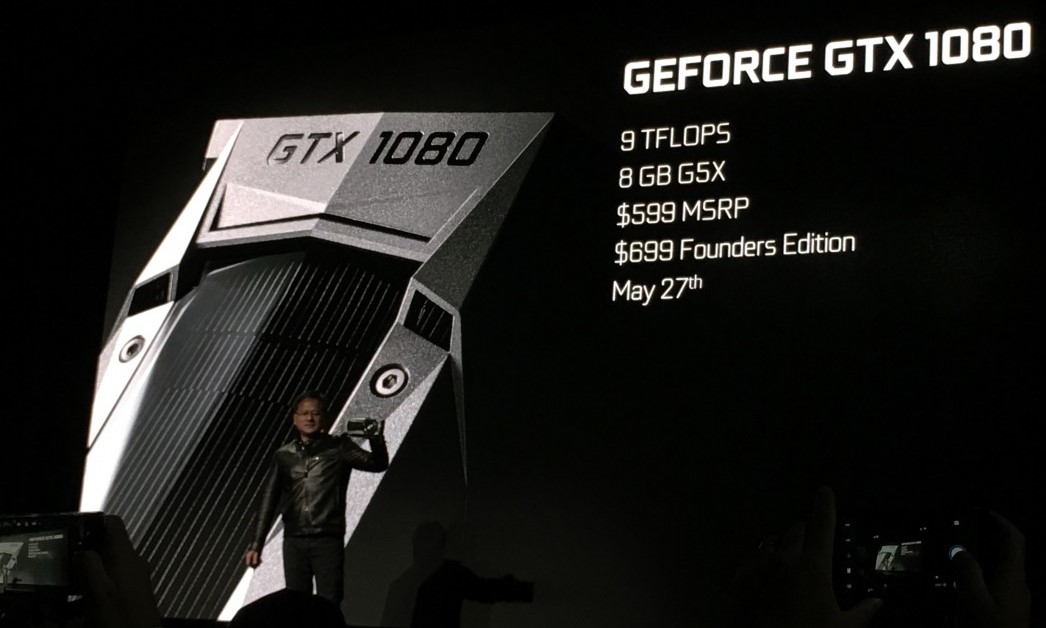 The Pascal GPU architecture is NVIDIA’s most ambitious ever. The biggest version of the Pascal family is the GP100 inside of the Tesla P100 high performance computing (HPC) GPU. That version of Pascal features 15.3 billion transistors, the most of any chip, ever created by anyone, ever. The newly announced GeForce GTX 1080 features the GP104 graphics chip with fewer transistors paired with 8GB of Micron GDDR5X, a brand new type of graphics memory. The improvements in memory bandwidth and latency mirror NVIDIA’s improvements in the Tesla P100 with the use of HBM2. However, while AMD did introduce HBM in their Fiji family of GPUs, it was limited to 4GB of VRAM capacity and this new generation that NVIDIA is using does not have such a limitation. Additionally, AMD is not using GDDR5X anywhere in any of their cards, so NVIDIA is the first to introduce this technology to the market in a product.

The biggest reason why NVIDIA is able to cram so many transistors inside of a relatively small chip is thanks to the new 16nm FinFET process from TSMC. This process allows for NVIDIA to not only build a small chip but to pack it with plenty of performance and to do it at a very low wattage. In fact, NVIDIA claims to be cramming approximately 29% more performance out of the GeForce GTX 1080 than they do from their most powerful graphics card right now, the TITAN X. Not only is NVIDIA claiming to be about 29% faster than the previous generation, they are able to accomplish this with only 180 watts of power. This represents a power reduction of 28% while at the same time delivering a 29% boost in performance. Traditionally, GPU manufacturers have had to give up some power savings for additional performance or vice versa, but with the new Pascal architecture and 16nm FinFET from TSMC you get the best of both worlds.

The GeForce GTX 1080 delivers even more performance once you start looking at performance in Virtual Reality (VR). It appears the entire GTX 1080 and Pascal were specifically designed with VR in mind. This includes support for hardware asynchronous computing as well as some of their VR Works software features like simultaneous multi-projection (SMP). NVIDIA claims that with the added hardware and software features on the GeForce GTX 1080 actually bring its VR performance to approximately two times that of the TITAN X, NVIDIA’s next fastest graphics card. However, in order to accomplish such performance, game developers have to implement NVIDIA’s Game Works proprietary SDK which includes their VR Works that enables the use of features like SMP. As many middleware programs go, the chance that it will be broadly adopted is to be determined, but there’s a good chance that there will be a handful of games that do and those that do could benefit from this performance boost. This is the promise of NVIDIA’s new technology inside of Pascal and the software that accompanies it. Plus, the VR industry is looking for anything to boost the category, so I expect developers and game engines will support both SMP and Async. Already, VRWorks is integrated into game engines today with features like VR SLI supported.

Prior to Pascal, NVIDIA’s Maxwell architecture supported asynchronous compute in hardware. Improvements to work scheduling in Pascal increases the overall performance in VR and improves the overall user experience allowing both compute and graphics functions to happen as they need to. This feature is extremely important in order to deliver a smooth VR experience and I suspect that NVIDIA knows this and has made sure their architecture supports it. NVIDIA prides themselves in the best possible gaming experience, so it only seems logical that they would want to deliver the best VR experience possible with the GTX 1080.

In addition to all of the features in the GeForce GTX 1080 that make it so VR friendly and power-friendly, NVIDIA’s new GPU is also extremely price friendly. The “Founder’s Edition” from NVIDIA comes in at a relatively low $699, which is a solid $400 less than their current top-end card the TITAN X, for more performance. NVIDIA also introduced the Founder’s Edition GTX 1070 that will be $379, which claims approximately TITAN X performance for about 1/3 the price. These new GPUs from NVIDIA deliver on performance, power and price, they are a complete win for virtually any gamer looking to spend more than $300 on a GPU. They will also deliver the best possible performance today, even if NVIDIA’s claims are overstated.

NVIDIA should continue to dominate over $300

NVIDIA is trying to capture the entire segment of the market above $300 that represents the “enthusiast segment”, which is about 20% of the overall GPU unit market volume and where the highest margins and revenue are. The biggest market segment is the “performance” segment which is below $300 and while it represents the most units sold this is where margins are thinner in this segment.

Unless something unforeseen happens, which I don’t think will happen, I believe NVIDIA should continue to dominate in this high ASP, lower units market above $300.

GPU’s that are more than $150 and less than $300 are the sweet spot for unit volume and unit market share which is why NVIDIA will likely need to extend the GTX 1000 family down to something like a GTX “1060” soon. This will be especially important for NVIDIA because Advanced Micro Device’s upcoming Polaris GPU will likely be squarely aimed at this price segment in order to recapture unit market share and potentially profits. After all, this is Advanced Micro Device’s self-proclaimed “year of graphics”.

If NVIDIA can successfully launch and price a GTX “1060” within this price segment they can defend their market share from Advanced Micro Devices in this price point, even if they effectively own the high-end. NVIDIA’s market share position is strong right now, but they already have a pretty strong command of the high-end and that’s why it’s important that they can launch into the lower price segments as well.

While AMD hasn’t yet launched Polaris, I believe it’s going to be an absolute fight from $149 to $299, so get ready for it.

The NVIDIA GeForce GTX 1080 and GTX 1070 are absolutely marvels of engineering from a company that knows what gamers want and who has been executing incredibly for the last few years. The company are delivering on the promise of Pascal and 16nm FinFET and they are even doing all of this while bringing down the price of their GPUs compared to the previous generation.

These new cards are important for the PC VR category as they radically improve the price-experience curve. While HTC is delivering and Oculus has been choking, at least we know that higher-end VR will look much better from a graphics perspective.

NVIDIA’s launch of the GTX 1080 has been extremely well received by gamers around the world and those who wish to see high performance and lower cost VR solutions. NVIDIA has without a doubt introduced what appears to be the fastest GPU for VR and it will be interesting to see how it actually stacks up in real world scenarios.

Thankfully, NVIDIA has provided us with a GTX 1080 in order for us to test their claims ourselves. NVIDIA has finally, fully committed themselves to VR and they don’t appear to be stopping any time soon, I expect to see more announcements in the VR space from NVIDIA as they continue to push Pascal through their different product lines.