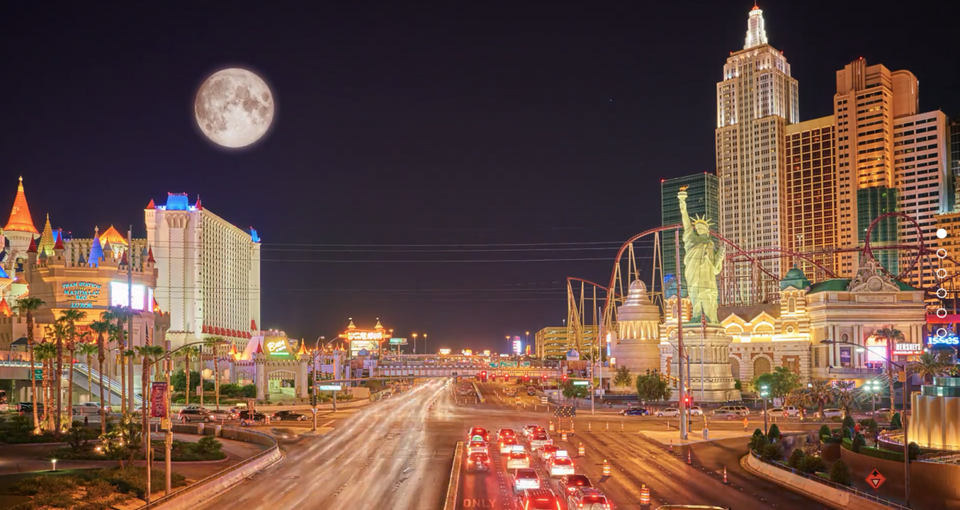 As I have said many times before, the stakes are very high in the space the industry refers to as “the future of work.” The future of work encompasses the new ways workers get things done in a modern age of heterogeneous devices (smartphones, tablets, PCs, smart speakers, watches), chat-based interfaces and simplified and more open workflow. Work is no longer a place, but where workers are as they are doing work. This can be in the office, coffee shop, the WeWork bullpen or the inside of your car and can be at any time of the day.

I think Microsoft surprised everyone with just how quickly it pivoted from on-prem only solutions to cloud and mobile with a sprinkling of AI. The new wrapper for all this Microsoft goodness is called “Microsoft 365”. Microsoft launched Microsoft 365, its all-in-one workplace solution, just a year ago, which I covered here. It has shown impressive growth and adoption since then, and now, on the eve of the Microsoft Inspire 2018 channel event, Microsoft announced a handful of new updates to make it even more powerful and accessible for users. Here’s my rundown of the new capabilities coming to Microsoft 365 on the eve of Ignite.

In 2017 Microsoft introduced Teams, a workplace collaboration hub that merged chat, meetings, file sharing, and apps, into one unified, shared workspace. It’s been a hit so far, with over 200,000 businesses across 181 markets in 40 languages. A few months ago I wrote on Teams’ progress one-year in—you can find that article here. Now, Microsoft is launching a free version of Microsoft Teams, hoping to kick adoption into an even higher gear.

The free version is now available across the globe, in 40 different languages. Organizations can have as many as 300 users on the free version, which includes features such as unlimited chat and search, built-in audio and video calls (individual and group), 10 gigabytes of team storage (and an additional 2 gigabytes personal storage, per person), access to Office Online apps, unlimited business app integration, and more. Microsoft is posing this free version as a sort of stepping stool to the full version within Microsoft 365. The full version includes all the same features plus Exchange email hosting, scheduled meetings, meeting recording, stepped-up storage, better enterprise security like MFA and SSO, and improved auditing and reporting, without any organization size restrictions.

I think this is a great move many smaller organizations were waiting for—lower the barrier to entry and show more organizations just how useful Teams can be. While large enterprises could always get access to a free version of Teams for testing, the mid and small markets didn’t have as easy access.  Slack has done very well in this market, and this free version removes one of the Slack’s black and white advantages. You can signup here for the free Teams.

Microsoft also announced it is making it easier for users to create live and on-demand events in Microsoft 365, using webcams, content, screen sharing, and more. Microsoft also announced that it is adding AI-powered enhancements to events in Microsoft 365. This includes a speaker timeline that utilizes facial detection to navigate to specific speakers within the event, searchable speech-to-text transcription, and closed captions. We’ve all had to sit through long, meandering meetings where it was difficult to find the thread. These look to be useful capabilities that will make it easier to sift through events after the fact to find relevant information. This is a great use of AI and machine learning and can’t wait to try it out. 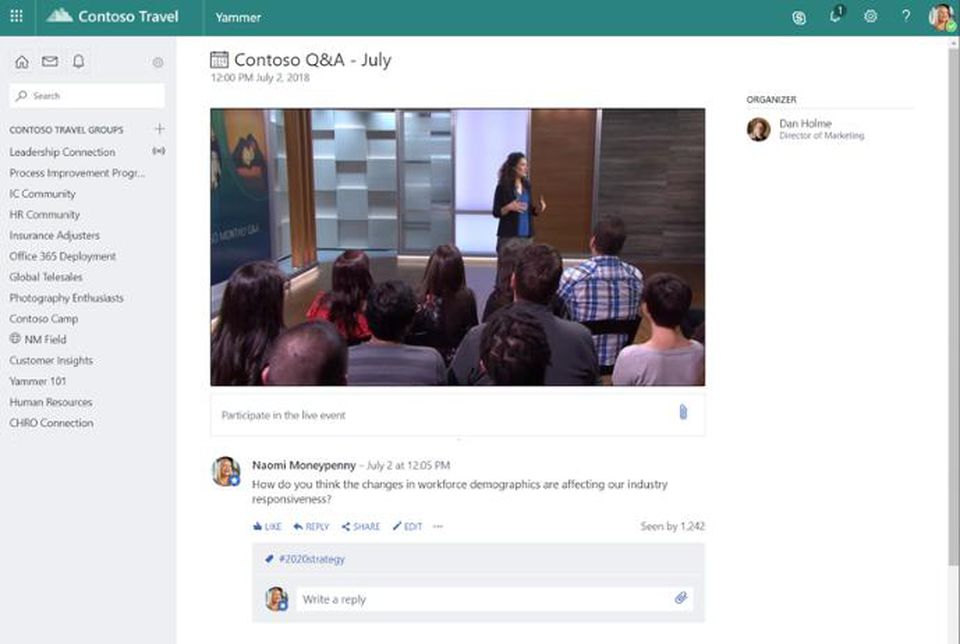 Microsoft also announced it was rolling out “nudges,” a feature that uses MyAnalytics to deliver various habit-changing tips to users. These might include recommending when you should book focused work time, or pointing out when you’re emailing a coworker after hours. I think these are great, innovative ways to utilize data analytics to improve peoples’ relationship with their work. There is a lot of technology geared towards making people more productive in the workplace, but much less energy devoted towards having a healthy, balanced relationship with work. Nudges leverages the trend of using technology to make technology less intrusive, ironic indeed. The focus on work is exactly what I would expect from Microsoft, given Apple and Google’s focus on removing consumer distractions.

You can find more info on Analytics and nudges here.

Microsoft also announced that Whiteboard is now generally available for Windows 10 (with iOS availability and web preview coming soon). Whiteboard is exactly what it sounds like—a digital Whiteboard application that allows people to collaborate both in person and remotely, in real time, using touch, pen, and keyboard. Users can draw, take notes, create tables, and more—perfect for creative work. It looks to be a great collaborative tool, well-suited for brainstorming sessions. 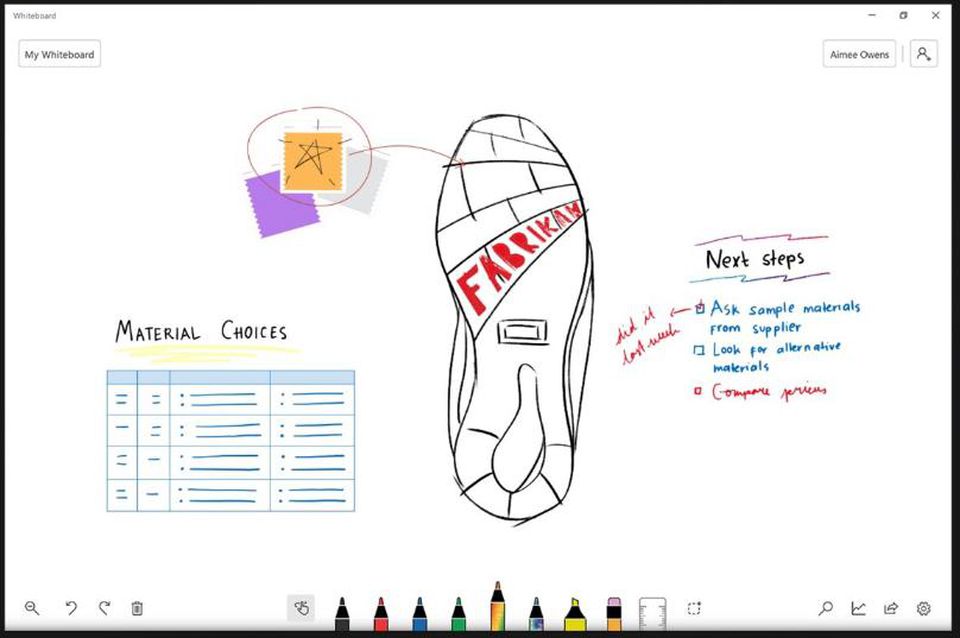 Whiteboard was originally released for preview back in December, and Microsoft says that its customers have played a critical role in fine-tuning the app’s features and user experience. Some of these features added since the preview include the ability to take text notes, the ability to insert and manipulate images, and better shape and table recognition. Additionally, the app has undergone accessibility and compliance improvements.

This is so simple as a concept and I am surprised this wasn’t released sooner, especially with both Google, Cisco Systems and even Samsung focused so much on whiteboarding. Critical to success and usage will be how well this works across heterogeneous compute devices and also how Whiteboard works with different Windows pens from different manufacturers.

All in all, these announcements all look to be nice enhancements to Microsoft 365 that I believe will bring in more users and improve the experience. The free version of Teams, in particular, is a smart move, and I think it’s going to allow Microsoft to grow its 365 user base even further. It’s also good to see Microsoft continuing to integrate AI into its offerings. This announcement is more proof that Microsoft is a very different company, ahead on many “future of work” fronts. I look forward to seeing more from the company at its Inspire 2018 event next week—stay tuned for more coverage.