Microsoft held its special Education event on Wednesday, and announced a handful of new products and services designed for and geared specifically towards teachers and students. While Microsoft dominates the installed educational base, Google Chromebooks and G Suite have grown in popularity in K-12 over the past few years as have Apple MacBooks for high schoolers off to college. While the education market isn’t a very profitable market, K-12 students may go off to college or secondary school and then off to a job where the industry standard tool is Microsoft Office and increasingly Office 365. Microsoft would like to see that continue. Given Microsoft’s challenges in the smartphone OS space, the company needs positive interaction with kids and schools beyond the very successful Minecraft and XBox franchises. Microsoft needed a meaningful response and this announcement was the day for it and the messages were as much for educators as it was for their broad partner base of hardware OEMS and ISVs. Microsoft needed to show it was in-touch with the needs of schools and students and could muster a simple and cost-effective solution.

Here’s a rundown of what was announced, and what I thought about it. I’m going to focus mainly on the software and services side of the announcements—as I already weighed in on the Surface Laptop here.

CEO Satya Nadella kicked off the day with a very personal and passionate story of how his grandfather and great uncle took two very paths and he wouldn’t be on stage if his grandfather wasn’t able to get the schooling he needed. I was touched. He related those personal experiences to the Microsoft mission and just how important education was to him and to Microsoft. Nadella was on fire and to me gave to me the most impassioned CEO plea I’ve heard in years. He really meant it and came across as very genuine and is onto solidifying his position as the one of tech industry’s best if the not the best oraters.

After Nadella’s opening remarks, he introduced Terry Myerson, Executive Vice President of Microsoft’s Windows and Devices Group. Myerson’s first big announcement was the unveiling of the new Window 10 S—an experience targeted to students and teachers with a strong emphasis on the (s)ecurity, (s)afety and (s)peed needed for educational settings. Myerson attempted to appeal to the audience’s emotions by repeatedly referring to 10 S as Microsoft’s “(s)oul,”—espousing the necessity for teachers to have the right tools to shape tomorrow’s innovators in today’s classroom. 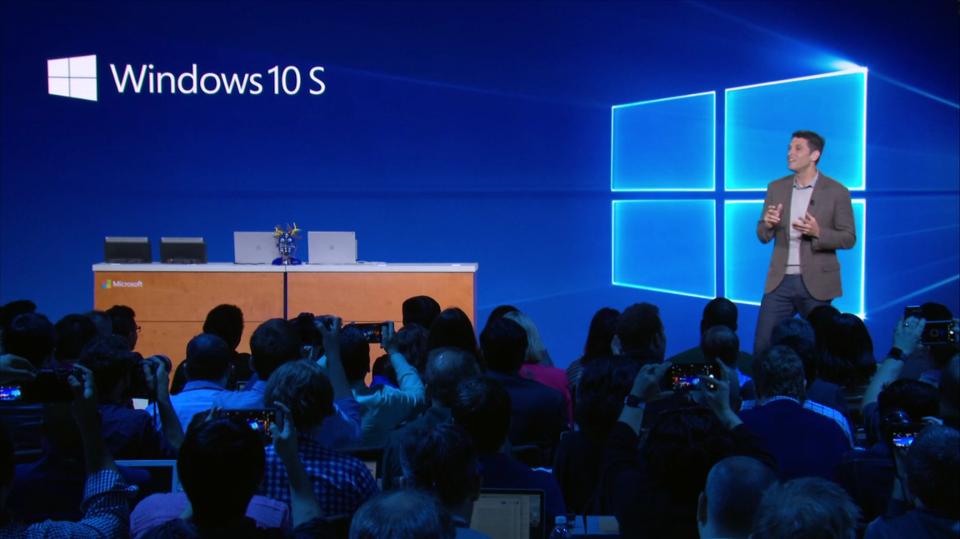 In the interest of security, safety, and speed, all the applications in Windows 10 S are downloaded from the Windows Store, where they are initially verified. The applications are then run locally within a secure container, which should provide consistency in performance, increased security and privacy and quick login times for students. However, for the certain teachers and administrators who understand the inherent risks involved in downloading apps from the Wild West of the Internet, they do have the option of making a one-way switch to Windows 10 Pro, so that they’re able to download and install anything they desire. Including this option was a good move—the open platform nature of Windows is one of its key strengths after all. Interesting to me was that this sets the table nicely for a Windows on Qualcomm notebook solution in the future.

All in on Edge and Bing

While Microsoft has been pushing really hard to make its browser, Microsoft Edge, ideally suited for the classroom, Windows 10 S does have the ability to run any browser—as long as it’s available in the Windows Store. But right now, Google Chrome is not in the store and this culd be an issue for some students and educators, particularly if they’re standardized on G Suite. At a minimum, I’d like to see Microsoft allow Google to be the default search engine or give some really good reasons why not. Bing is good quality search and it’s the default searche egine for Apple iOS, but people like choice.

Edge is very fast, power-efficient and Microsoft reinforced some of its differentiating features for Microsoft Edge at the event as well—a new Tab Preview Bar, and a feature called Windows Ink, which allows students to scribble notes directly onto a web page for saving and sharing. Inking in education is a big deal, bigger than in any other market and I’m excited to see where this goes. It’s going to take a lot of effort and innovation to cut into Chrome’s dominance in the classroom, but Microsoft seems to be doing what they can to make their browser more appealing to the millennial set.

Slimming down Intune to speed up deployment and simplify management

Educators don’t buy Chromebooks just because they’re cheap and because G Suite is almost free. Free services matter, but not as much as simplicity and in my opinion, that’s Chromebook’s and G Suite’s #1 value proposition right now. Ironically though, as Android apps are added, this could change as the experience is currently rough as I write here.

One of the most powerful education features announced today was Microsoft Intune for Education, which Microsoft is positioning as a “complete end-to-end solution for teachers and schools” for configuration and management of student computers. Intune is very powerful, mature and tens of thousands of businesses and educators rely on it already. The most important thing Microsoft is doing for educators is to simplify Intune and the setup process. The setup screens I saw were much easier than the Intune for businesses and it is my hope that Microsoft also simplifies the language it uses.

I think Microsoft has the right idea with Windows 10 S and all of its new features—it’s doing a good job appealing to the specific needs of the classroom, and I think it’s enough to at least make educators stop and think about their current technology and reevaluate whether or not there might be a better option out there.

Catherine Boeger, GM of Microsoft Office and Office 365 took the stage next, and introduced Dr. Anthony Newbold, the principal at Bear Creek Middle School, in Fairborn, GA to talk about the some of the work his school has been doing with Office 365. Boeger then went on to announce Microsoft’s newest addition to 365—Classroom Experiences in Microsoft Teams. The goal of this is to take the concept of Microsoft Teams and gear it towards students and teachers, so that it might become their one-stop digital hub for collaboration. Educators can use Teams to personalize the classroom experience—they can distribute materials, incorporate rich content, grade schoolwork, and communicate with their fellow educators, students, and every teacher’s nightmare—helicopter parents. From what I have seen so far, Microsoft had a quality V1.0 collaboration tool experience in their hands with the original Microsoft Teams—I think gearing a version to this specific purpose is a smart move that will only bring more users on board. While the jury is still out on whether conversational modalities actually improve productivity, it would seem that kids would “get” it as they spend a lot of time on smartphones in messaging.

Deirdre Quarnstrom, Microsoft’s Director of Minecraft for Education, took the stage to introduce a new tool for the massively popular game Minecraft: Code Builder for Minecraft, Education Edition. Code Builder aims to get students interested in coding, by teaching them the basics within the open worlds of Minecraft. Code Builder integrates several of the most popular learn-to-code programs (Tynker, ScratchX, and Microsoft’s own new MakeCode) with Minecraft, so that students can explore and build within Minecraft by writing their own code. If the demonstration they showed us is any indicator, I think this will be a great, fun way to introduce kids into the world of coding and inspire creativity. In a way, I’m reminded of Davidson’s classic learning game from the 80s and 90s, Math Blaster, except geared towards coding in the 21st century. Like Davidson, Microsoft understands that the key to learning is making it interactive and fun—I almost wish it had been around back when I was a student. Minecraft in the classroom is nothing new as I have attended the past two Minecons and Microsoft spent a lot of time at the show getting educators up to speed on how to bring it into the classroom.

I’m not going to spend too much time on it as I wrote about it here  but I did want to briefly mention the hardware announcements from the event. Microsoft introduced a new Surface Laptop, powered by Windows 10 S, designed to showcase all the new 10 S capabilities while being upgradable to full Windows 10 Pro. The Surface Laptop is not intended to replace Chromebooks, it’s designed to be an alternative to Apple Macbooks.

Microsoft also reinforced the new round of partner devices that will be powered by Windows 10 S, with products coming from the likes of Acer, HP Inc, Samsung Electronics, Dell, Toshiba, ASUS, and Fujitsu. You can get these from $189 to $299 and these devices are intended to compete with lower cost Chromebooks.

Another announcement made was a strategic partnership with the education powerhouse Pearson, to bring Pearson’s curriculums to all Windows 3D and Mixed Reality devices. I’m glad to see they’re keeping an eye on these new technologies in the classroom, because they really do have potential—however, I’m glad this wasn’t the main focus of today’s event. Frankly I got enough Mixed Reality hype from Facebook’s F8 developer conference a few weeks ago to last me a good while.

Microsoft also announced that their Microsoft Stores will be hosting STEM workshops every Saturday throughout May, where participants will get to do some hands-on learning, building a sensor to help measure and understand the anatomy of the human hand. It sounds pretty neat—I might have to go check one of them out if my calendar permits.

Also announced was a nice bundle of promotions and freebies for teachers and students—new Windows 10 education PCs will be available, starting at a highly reasonable $189. They’re also offering Windows 10 S and Microsoft Office 365 for Education with Microsoft Teams, for free to any schools currently running Windows Pro PCs. They’re also providing free one-year subscriptions to the new Minecraft Education Edition, for the new Windows 10 education PCs, and a free trial of Microsoft Intune for Education. I think all of this is great. They’re not making educators jump through hoops and shell out a fortune to gain access to all the cool new stuff they introduced today.

I came away from the event feeling impressed—I think Microsoft did everything they needed to do to paint themselves as a great option for educators by reinforcing commitment to the space, simplicity and low cost. While I haven’t used it yet, Windows 10 S looks to be a secure, user-friendly platform better-suited for the classroom, and the new Classroom Experiences for Microsoft Teams looks as though it has the potential to make collaboration easier, and more enjoyable for everyone involved. Intune for Education is spot-on and I’d like to see continued simplicity for very small schools and classrooms. Code Builder for Minecraft is a fun way to get students engaged with basic coding. On top of it all, the promotions Microsoft is offering for students and teachers starting at $189 make the barrier for entry low and affordable. Microsoft just raised the ante and I’m looking forward to Google’s response.

Posted by Patrick Moorhead in Chromebook, Personal Computer, Personal Computing, Tablet , Followed with Comments Off on Microsoft Goes After Google With New Education Products And Services