03 May Job Creation And Beating China: Political Rally Or A T-Mobile/Sprint Merger? 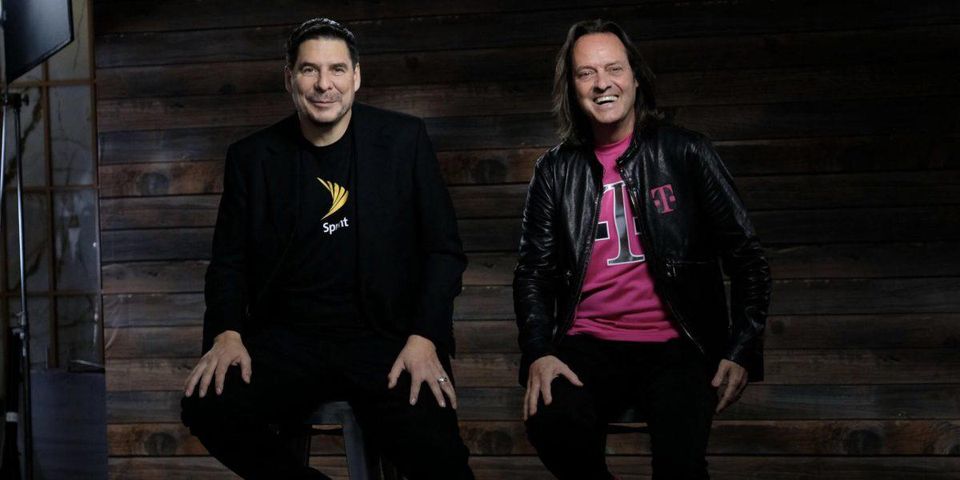 The on again, off again rumors about a T-Mobile and Sprint merger were finally laid to rest this week. CEOs John Legere and Marcelo Claure, clad in their respective corporate colors of magenta and yellow, joined each other and announced their intent to combine companies. If approved by regulators, “Newco” (as it has often been referred to by both sides) would become the second largest carrier in the United States with over 100 million subscribers—placing it just behind Verizon Wireless and ahead of AT&T . What are the real implications of this deal? I had an opportunity to participate in the merger announcement and both companies’ earnings calls this week and would like to share my insights.

On Sunday, the merger call with industry analysts really sounded more like a political rally. Net new job creation and beating China to the 5G finish line were the punctuation marks, clearly aimed at appealing to the Trump administration, whose approval they will need. I was interviewed on NPR MarketWatch for my perspective following the call and if interested you can listen to the segment here.

Regarding job creation, there wasn’t a lot of detail behind the claim beyond maintaining campuses in the Pacific Northwest and Midwest where both companies have headquarters. However, I believe the combination does have the potential to grow jobs. T-Mobile has traditionally been strong in the consumer space by offering generous unlimited data caps and bundled content such as Netflix. Sprint, on the other hand, brings strength on the enterprise side by offering both wireline and wireless services. With very little segment overlap and a new roaming agreement announced this week between the two, this merger would open the door to broadening market reach and services revenue—not only current LTE, but future 5G networks.

In regards to China’s current slight edge in the 5G race, many ask “who cares?” From my perspective, it’s less of a national security issue and more of a first mover advantage in the new mobile digital economy and the resulting job creation. 5G’s performance is expected to be 10x that of today’s 4G LTE, with lower latency that will dramatically improve application responsiveness. With these significant improvements, new use cases such as remote factory automation, smart city deployment with massive and narrow IoT device connectivity, and telesurgery will likely emerge as paradigm shifters. Remember how digital cameras made film cameras obsolete, and how ridesharing with connected smartphone apps disrupted the unreliable and higher cost taxi service industry? I believe the potential here is one of the things that keeps our nation’s politicians up at night.

Combining T-Mobile and Sprint spectrum holdings would enable the new company to deliver ubiquitous 5G coverage, and the carriers’ mutual focus on mobile vs fixed 5G would allow them to really double down. In contrast, AT&T and Verizon are dividing efforts between fixed and mobile 5G deployment; this potentially dilutes their mobile launches, where I believe the strongest use cases exist for the next generation network. Could a combination of both carriers speed up the deployment of 5G? Quite possibly. Additionally, there would be capital expenditure advantages in sharing cost as the 5G infrastructure (including Sprint’s much-touted Massive MIMO) is deployed.

The million-dollar question: approval or veto?

I believe regulators will approve the T-Mobile and Sprint merger. I spoke to the benefits last year— if interested, you can find that article here. Both companies posted strong earnings this week and have the wind at their backs as they sail into Washington to kick off the regulatory engagement with Marcelo Claure at the helm (he relinquished daily CEO duties this week). Sprint posted its best financial performance in company history and T-Mobile added another one million subscribers for the 20th consecutive quarter.

T-Mobile has demonstrated a solid track record over the last few years of being the “un-carrier” by eliminating contracts, lowering prices, launching the unlimited data plan revolution and bundling content. It will take more than that to be successful in the enterprise, but that’s where the Sprint DNA will be beneficial. With John Legere tapped to lead the “Newco” carrier, I expect that a relentless focus on driving subscriber value will continue. Mergers are often blocked by concerns of anti-competitive practices, limited options, and higher prices. If Legere and Claure can demonstrate to Washington their commitment to delivering subscriber value, growing jobs and beating China to 5G, I’m confident this deal will get done.

Posted by Will Townsend in Carrier/Wireless , Followed with Comments Off on Job Creation And Beating China: Political Rally Or A T-Mobile/Sprint Merger?