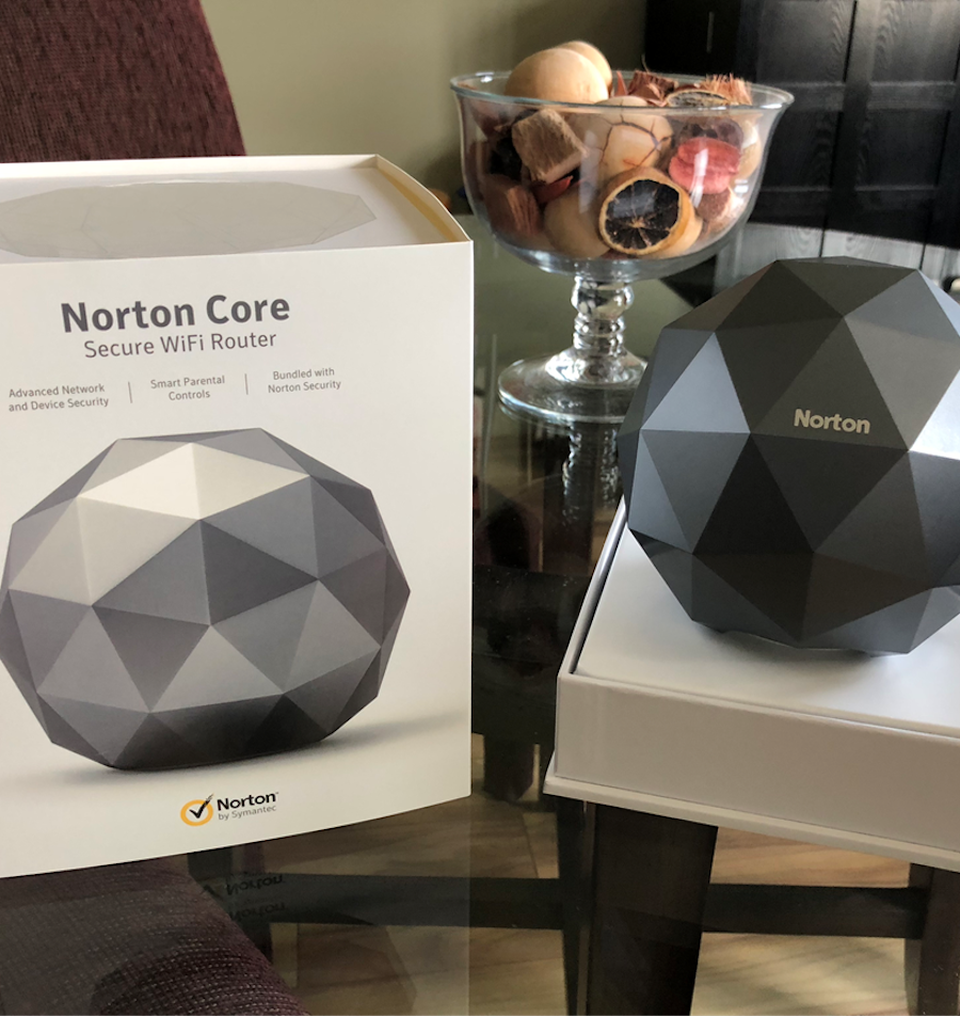 Even technology “experts” like myself can make boneheaded decisions—but at least I learn from them. My epiphany, learned the hard way, came around 2009 when I traveled to Houston for a meeting with HP . I stopped for lunch at a local restaurant, leaving my briefcase with my notebook computer and a 500MB portable USB drive (containing several years of work presentations, emails, spreadsheets and other critical job-related data files) inside my rental car.  You can probably see where this is going—while I was eating lunch, my car was broken into and my briefcase stolen. While I couldn’t have cared less about the notebook, the theft of the portable drive was a huge loss. It took me weeks to recover even a small portion of my data files. Upon returning to San Jose, the first thing I did was subscribe to a cloud-based storage service; I’ve been a happy camper (at least as far as data backup goes) ever since.

This story underscores the unfortunate fact that many consumers wait to take proactive security measures until something calamitous happens and they have to learn the hard way. Sadly, I strongly suspect that this is happening today in every home with a router and more than a handful of devices connected to the home network (not just notebook and PCs, but tablets, smartphones, smart thermostats, home security devices, gaming consoles, etc.). Beyond installing anti-virus software on their PCs, the typical consumer doesn’t think a whole lot about securing the devices connected to their home network. That is exactly the type of naiveté that allows bad actors to tunnel into your network for nefarious acts. You probably aren’t too worried that someone will hack into your Nest thermostat to raise the heat to 95 degrees. You would care, however, if someone hacked your Nest to access the other devices in your network and the data that is stored on them.

Enter the Symantec Norton Core, an ambitious new router designed to attack the very problem I’ve described above. Priced at $199.99, the Core operates as both a router and a network security solution. Included in the price is a free 1-year subscription to Norton Core Security Plus software, which you can install on an unlimited number of Windows, Apple AAPL +0.11%, and Android devices. The software helps protect the network and all IoT devices, and offers parental control management.  After the first year, a continued subscription costs $9.99 per month. If you decide not to renew, the Core continues to function as a traditional high-performance router with basic security features like secure boot, firmware updates, and encryption of personal data at the router level (though its advanced security features and parental controls will no longer function without the subscription).

Out of the box, the Norton Core looks like no other router you’ve ever seen. At roughly 6” x 6” x 6” (HWD), the Core’s polyhedron-like look would look right at home in a command center in the next Mission Impossible or James Bond sequel. Available in Granite Gray or Titanium Gold, you almost want to put it on display in your home in a place where others can see it. The Core has a LED light ring at its base, which discretely glows white when operating in a normal manner and amber when something is askew. The Core is thoughtfully designed with a hollowed-out compartment for cables at the bottom of the unit. Inside this compartment is a gigabyte WAN port, 3 gigabyte LAN ports (which some users may find a bit skimpy), 2 USB 3.0 ports, a power port and a reset button. Core also includes a Bluetooth radio to aid with the set-up process (which is completely facilitated by the Core app on your mobile device). 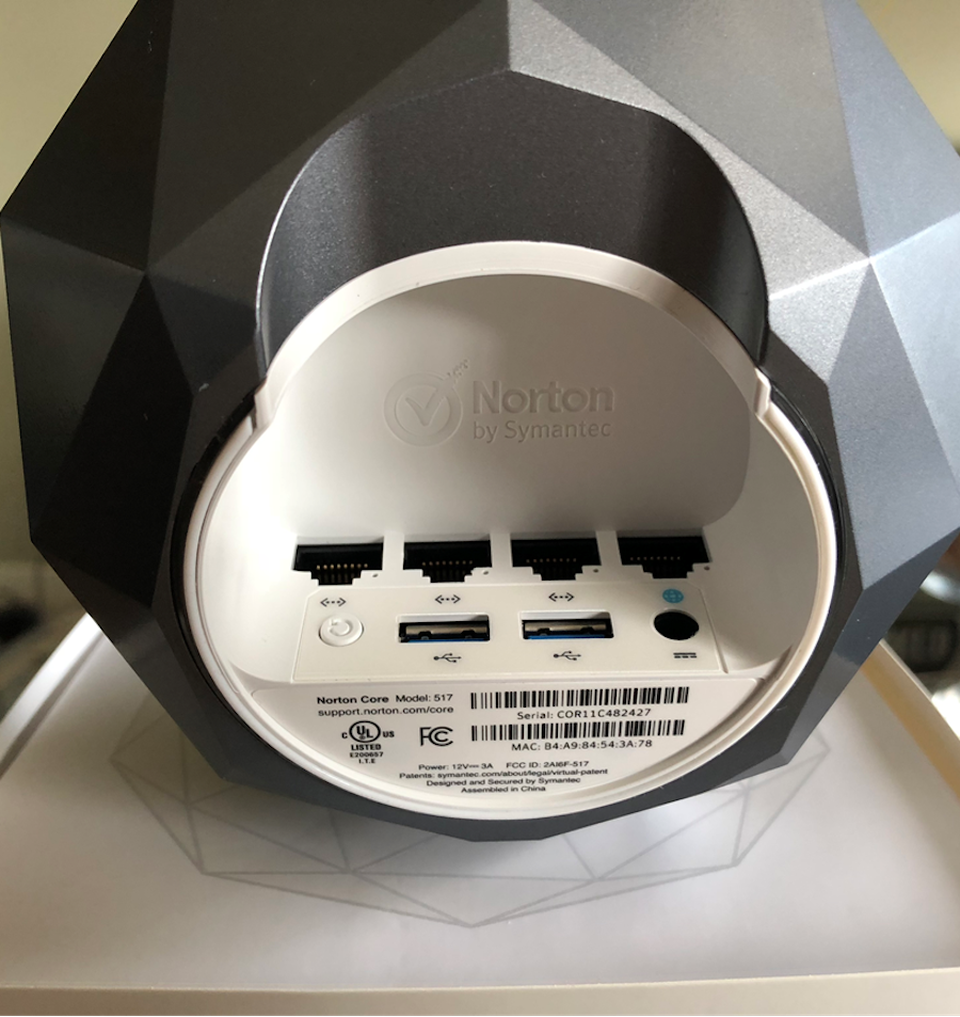 Back view of the Norton Core.

Core’s internal technology ingredients include a powerful Qualcomm Dual-Core 1.7GHz processor with 1GB of RAM, 4GB of Flash memory, as well as 2.4GHz and 5GHz dual-band radios that support 802.11ac Wave 2 Wi-Fi. Core is a 4 X 4 AC 2600 router, and supports MU-MIMO streaming. The very cool sphere design also has a functional advantage: it facilitates the internal omnidirectional antenna tower’s 360 degrees of coverage. This essentially provides Core with the beamforming capability to automatically extend coverage when it detects a device.

Norton Core distinguishes itself by offering the most painless setup process I’ve seen with a router. Unlike traditional routers (which force you to configure the router via a poorly designed website on your PC), you simply download the Core app, create a Norton account if you don’t already have one, and go through the setup process step by step. The app guides you through naming your network and the creation of a network password. My setup experience took all of 10 minutes, the bulk of that being the Core’s initial firmware update. Even with that slight slow-down, I was up and running much faster than I had expected.

What’s so different about Core?

Core’s magic comes from monitoring the data in and out of your home network and alerting you when there is an intrusion or something suspicious. When that occurs, not only does Core alert you via its app, but it also (more importantly) immediately revokes access to your network, warding off a potentially catastrophic attack. Norton also uses machine learning algorithms curated from its knowledge base of millions of end users to identify odd and suspicious network activity.

What truly impressed me about Core was that its well-designed app gives you a real-time score of your security level after scrubbing your home network for gaps and potential issues. When issues are detected, in many cases you can use the app to take specific remedial actions, such as creating more sophisticated passwords on your network. If you have a smart home with multiple IoT devices like I do, Core will proactively quarantine a device if it displays unusual traffic patterns. Denial-of-Service (DoS) attacks that occur at the IoT device level are becoming more and more frequent and they represent perhaps the most devious of intrusions into your home network—they typically go unnoticed for long periods of time until very bad things happen. It doesn’t help that many IoT companies have atrocious reputations for building top-flight security into their products and have porous access holes (e.g. default password to access the device is “password”). Nearly all IoT devices can directly run security software, but this incredibly important protection feature is often overlooked.

Core’s app also includes a number of other security goodies that families will find valuable, including, as I mentioned earlier, Parental Control. This allows users to block entire categories of unwelcome content for specific age groups.  You can even manage and limit Internet access for specific users at the device level, which will be a boon to parents who want to keep their children off their smartphones during dinner.

How will overall router performance be impacted?

Being a performance hawk, my initial concern about Core was not its ability to secure my network and IoT devices from outside attacks, but whether router performance would measure up to other options on the market. I’ve been happily using Netgear’s popular Orbi mesh-based router solution for the past year, which uses various satellites to extend consistent Wi-Fi throughout my home. I like that Orbi’s satellites have LAN ports that allow you to connect IoT devices that don’t have wireless capability and require a wired Ethernet connection. For the most part, Orbi has worked well in my 1,800-foot loft, though there is a small, out of the way room that can’t seem to get reliable access to Wi-Fi, presumably due to the construction materials used in my building.

I tested the Core with well-known utilities from Speedtest.net, and it performed quite admirably. In my weeklong testing, download speeds were almost exactly comparable to the Orbi (averaging around 298Mbps) and upload speeds were consistently in the 13Mbps range. Core’s average ping speeds were in the sub-12ms range (again, not materially different from experience with Orbi). Remarkably, Core was able to provide more consistent Wi-Fi access to that one troublesome room in my home, though speeds topped out at 73Mbps down and 12Mbps up. I consider that a victory, considering that Orbi has always struggled with providing any access to that small room, despite having 2 other satellites connected to the main hub. I’m not sure what to attribute this to—my only thought is that Core’s superior form factor design, internal antenna layout, and beamforming ability must handle the nooks and crannies of my home more efficiently than Orbi.

Norton Core is the first consumer hardware product that Symantec has launched. While Symantec has a venerable reputation in the security software space, developing consumer hardware is not an easy task and many software companies have failed to offer compelling consumer hardware products. In this respect, Symantec deserves credit for developing a product that not only addresses a very real problem—home network protection for the scores of IoT devices and mobile devices showing up in today’s smart homes—but is also compelling from an industrial design standpoint and easy to set up for “non-techy” consumers. Core’s $199 price point is competitive with comparable mesh offerings from Eero and Linksys, and those have less horsepower and lack the integrated security benefits that make Core standout.

There are a few caveats. Technically, the Core router is 100% “mesh network ready” and will be able to connect to additional Core units and extend Wi-Fi coverage throughout large homes. However, this capability will require a future firmware update for which Norton representatives have not provided a specific release date yet. If you have a very large home (more than 4,000 square feet), keep in mind that the ability to enable Core’s mesh support will require a software update due later in the year. I’m also a bit disappointed that the Norton Core Security software suite doesn’t include Norton WiFi Privacy, the company’s standalone VPN software product—it’s an extra $50 per year. Including software VPN support as a standard feature would enhance Core’s value proposition and the Norton team should consider offering it as a standard part of Core’s bundled software package.

These quibbles aside, if you’re focused on securing your home network from outside intruders—and you should be—Norton Core is an innovative but reasonably priced peace of mind solution worth consideration. You wouldn’t drive a car or own a home without insurance—I wish consumers would taking the same approach with their home networks. Sadly, some consumers are going to have to experience a catastrophic attack to their own home network (with all the negative consequences that follow) before they take home network security seriously. Don’t let that happen to you.

Posted by Mark Vena in Connected Home , Followed with Comments Off on First Impressions: Norton Core And The Future Shape Of Home Network Security