Intel is a giant in the in the server chip space commanding 99% market share, and in compute for the data plane of datacenter storage and networking, 50 to 75% share. This may lead some to believe the company’s datacenter growth prospects are dim. Not so fast. First off, cloud, HPC and AI are growing […]

It is not much of an exaggeration to say that Artificial Intelligence (AI), in its present form, would not be possible without NVIDIA GPUs. NVIDIA has enjoyed near-universal support from some of the largest adopters of Machine Learning technology, as NVIDIA’s speedy GPUs accelerate the training and use of the Deep Neural Networks that enable […]

30 Jun Has AMD Secured A Spot In The Datacenter?

When AMD exited the server market back in 2012, it held 10% market share. While not a large chunk of the market, the legacy of Opteron and relationships with OEMs and big datacenter customers translated into market significance. This was important, as this market significance assured broad software ecosystem support when AMD released a new […]

Posted by Matt Kimball in CPU GPU DSP FPGA, Datacenter, Semiconductor, Server , Followed with Comments Off on Has AMD Secured A Spot In The Datacenter?

26 Jun ISC17: HPC Embraces Diversity As AMD & ARM Up The Ante Vs. Intel, IBM And NVIDIA

Renewed Competition in HPC Will Enable Workload Optimization Intel has enjoyed a dominant position in High Performance Computing (HPC) processors for nearly a decade now, with only IBM  POWER offering a viable CPU alternative, since Advanced Micro Deviceseffectively, albeit perhaps unintentionally, exited the market in 2010. Meanwhile, NVIDIA has kept things interesting by delivering GPUs as […]

Posted by Karl Freund in CPU GPU DSP FPGA, Semiconductor , Followed with Comments Off on ISC17: HPC Embraces Diversity As AMD & ARM Up The Ante Vs. Intel, IBM And NVIDIA

HPE President Antonio Neri and AMD CEO Lisa Su at AMD’s EPYC launch Advanced Micro Devices (AMD) made big waves in the industry this week with the launch of its 7000 series high-performance datacenter processors. I attended the pre-brief event in Austin, this past week, and I’ve already written my deep-dive on the launch, and […]

Today’s demanding workloads and complex environments leave businesses looking for every ounce of available performance from their systems. While CPU vendors strive to deliver the highest level of performance at all times, CPU manufacturing processes leave some variability that prevents vendors from capitalizing on every last drop of performance in an individual CPU. Because CPU […]

Benchmarks help determine the relative performance of different platforms, neutralizing technical differences so IT can better ascertain the actual workload impact. The SPEC CPU 2006 benchmark has helped IT generate a relative performance baseline for CPUs across different platforms for over ten years. But being more than a decade old means the benchmark no longer […]

With each new enterprise platform transition, the reliance on technology increases. Today, businesses are looking to strategies like digital transformation to reshape their operations, but these new approaches to business will put more stress and reliance on servers. By digitizing, instrumenting, and capturing untold amounts of data, businesses can get a better handle on their […]

AMD EPYC processor The server CPU business has never been any easy one for anyone, even for Advanced Micro Devices, who once held 25%-unit share. Many companies have tried and failed to penetrate the enterprise “wall of Intel” the last decade and I have seen one go out of business, one get bought, many cease […] 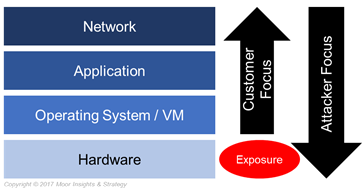 Security is a looming issue for businesses. The threat landscape is increasing, and attacks are becoming more sophisticated. Emerging technologies like IoT, mobility, and hybrid IT environments now open new business opportunity, but they also introduce new risk. Protecting servers at the software level is no longer enough. Businesses need to reach down into the […]

31 May What Does It Mean That Windows On Qualcomm Gets Support From ASUS, Lenovo And HP?

The personal computer has been evolving ever since the recent punch in the gut from smartphones and tablets. Since then, the bottom has literally fallen out of tablets, smartphones are flat, and exciting growth segments within the PC sector keep humming, albeit the market is at a much lower level. Consumer electronics players like Samsung, Huawei, […]

Posted by Patrick Moorhead in CPU GPU DSP FPGA, Personal Computer, Personal Computing, Semiconductor , Followed with Comments Off on What Does It Mean That Windows On Qualcomm Gets Support From ASUS, Lenovo And HP?

At Computex 2017, Intel made a series of major announcements regarding their latest high-end processor offerings. This included the introduction of a new X-series of processors which are designed to be the company’s high-end performance platform for power users and prosumers. The creation of the X-Series comes as Intel starts to feel heat from the […]

30 May ARM Introduces New Processor Designs For Datacenter, Mobility And AI At Computex 2017

This week at Computex 2017 in Taipei, Taiwan, ARM Holdings announced their latest series of processor designs spanning mobility, datacenter and AI. While ARM Holdings doesn’t make chips themselves, they do design processor cores and other IP for most chip companies to utilize with their own designs. Just last month, ARM introduces their first ISP (image […]

This Audi self-driving car I rode in looked surprisingly normal- with no computer in the trunk! Earlier this month, I attended Intel’s first Autonomous Driving Workshop in San Jose, where press and analysts enjoyed demonstrations and talks from both Intel, and a handful of their partners—BMW, Delphi, Ericsson, and HERE. The tangible news, perhaps, was […]

Posted by Patrick Moorhead in CPU GPU DSP FPGA, Semiconductor , Followed with Comments Off on Intel Absolutely A Player To Be Reckoned With In Autonomous Driving Technology

Google  announced the 2nd generation of the company’s TensorFlow Processing Unit (TPU), now called the Cloud TPU, at the annual Google I/O event, wowing the industry with performance for Machine Learning that appeared to eclipse NVIDIA’s Tesla Volta GPU only one week after that chip was launched. (See below why I say “appeared”.) Unlike Google’s […]

20 May AMD’s Financial Analyst Day 2017: On The Cusp Of Greatness Again?

AMD CEO Lisa Su shows AMD’s market focus at AMD’s FAD 2017 I attended Advanced Micro Devices’ Financial Analyst Day (FAD) last Tuesday at their headquarters in Sunnyvale, CA. While I am not a financial analyst, but rather an industry analyst, I am looking for different signals than that audience, but I have found the […]

Posted by Patrick Moorhead in CPU GPU DSP FPGA, Semiconductor , Followed with Comments Off on AMD’s Financial Analyst Day 2017: On The Cusp Of Greatness Again?