The tech space never ceases to amaze me. The fact that a 79-year-old company like HP  Inc. can reinvent itself and successfully navigate through the complexity and challenges of the smart home is impressive, to say the least. It has done this not by launching whiz-bang gadgets, but by smartly applying its innovation chops and know-how in the consumer printing space. To put it bluntly, this isn’t your father’s HP anymore.

I’m going to concentrate on the consumer printer space in this column, but a similar story could be told of its consumer PC business. Both HP’s PC and printer businesses are doing well, as evidenced by its recently announced Q4 FY18 results (see Figure 1). 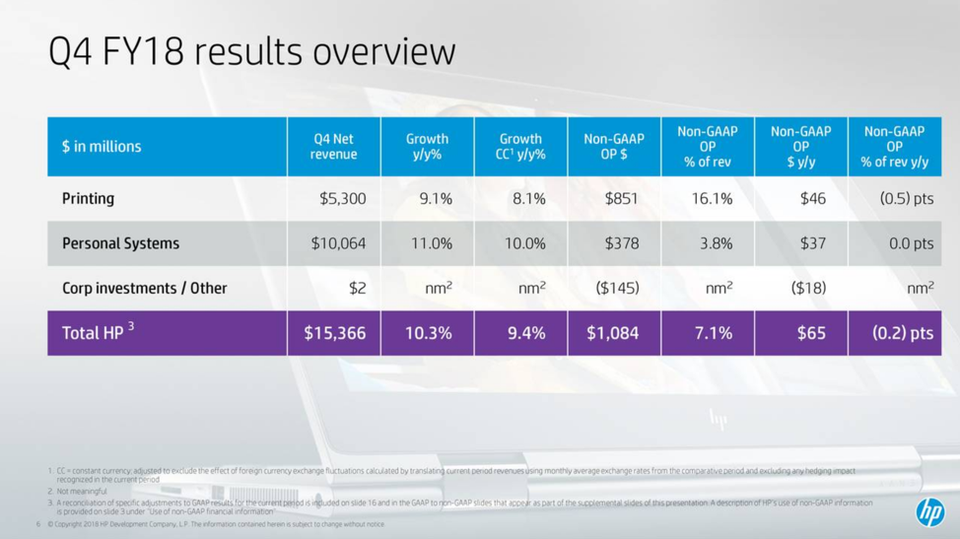 Today I wanted to do a deep dive on three innovative offerings from HP’s printer business that demonstrate how the company is defying the odds and winning in the consumer space.

#1: HP Tango X proves that innovation is still possible in the printer space

While it’s unquestionable that the consumer printer market has been impacted by the paperless shift to mobile devices (especially smartphones) over the past decade, HP has successfully managed to reinvent itself in the consumer printer business. The first great example of this I want to discuss is the Tango X Printer. 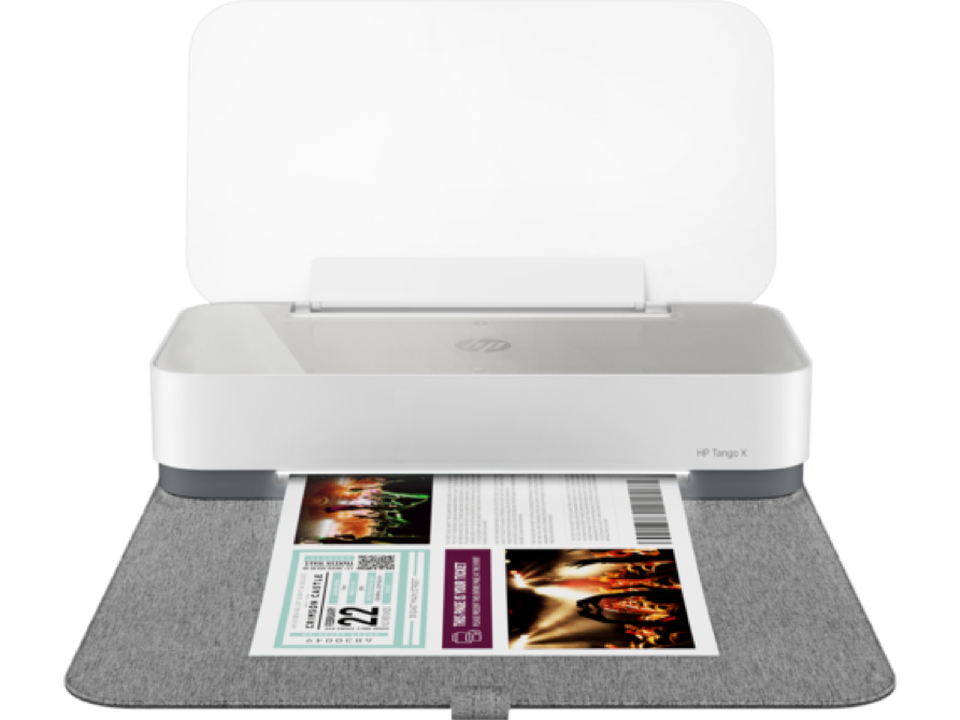 Unlike most printers on the market, the Tango X has the distinction of being designed to function primarily with mobile devices. Desktop PCs and notebooks will still work with the Tango X, of course, but it was all clearly designed and engineered with mobile devices in mind, in terms of usability and convenience.

My first reaction after removing the Tango from its colorful box is that I could have mistaken it for an Apple product if I hadn’t seen the HP logo on the packaging. The $199 Tango X comes with a fabric “wrapper,” available in Charcoal and Indigo, that folds around it and almost disguises the fact that it is a printer. It’s clear that HP’s goal was to make sure that the Tango X fits agreeably into most homes from a decor standpoint. The fabric wrapper not only hides the printer when not in use, but provides a nice cloth exit path when unfurled.

The Tango X’s setup is a breeze—simply download HP’s brilliant Smart App (more on this later) and it connects to your mobile device via WiFi. Beyond the AC power cord, no physical connection or interface (like USB) on the Tango X is supported—underscoring the product’s positioning as a truly mobile printer, capable of fitting in very small spaces throughout the home. From a print quality standpoint, I found that Tango X provided very clear text printing (certainly suitable for business documents, school reports, and other correspondence). Where the printer really exceeded my expectations was with its terrific photo printing. Tango X is only a four-ink printer, so its color range is not as broad as the competitive five and six-ink printers on the market. That said, unless you have professional print requirements, it’s unlikely that you’ll notice any real material difference. Tango X prints at a speed of 11 pages per minute (ppm) for monochrome text and 8ppm for color—not spectacular, but certainly fast enough for the typical consumer.

Tango X does not have integrated scanning capability like a legacy “all-in-one” printer.  Rather, its mobile-based Smart App does all the heavy lifting.   I don’t normally rave about an app, but this Smart App is one of the best printer-related apps I’ve ever used. It’s worth downloading even if you don’t have a printer. With the incredibly intuitive app, you can use your mobile device to take simple snapshots of documents and images, adjust the borders manually (if needed), and save the image as a JPEG or even multi-page PDF. Using the app, you can effortlessly scan to the cloud (e.g. Dropbox , Box , or Google Drive), scan directly to an email, or print the scanned image.  Additionally, if the app is connected to an HP printer, it will monitor your ink supply levels and notify you when you’re running low.

Tango X is a noteworthy initial effort in the developing “smart printer” category. If the $199 MSRP seems a little steep, a cheaper model is available without the fabric wrapper for $149. My guess is that the Tango X will be jumping off retailers’ shelves this holiday season.

The HP Sprocket 2nd Edition is a great follow-up to the original Sprocket, which was launched in late 2016. The Sprocket is the ultimate portable printing device—it connects to your mobile device via Bluetooth, and allows you to print instant 2” X 3” photos (and even stickers) on the go. The Sprocket 2nd Edition goes for an MSRP of $129.  A “Plus” model, capable of printing larger (2.3” X 3.4”) snapshots, is available for $149. 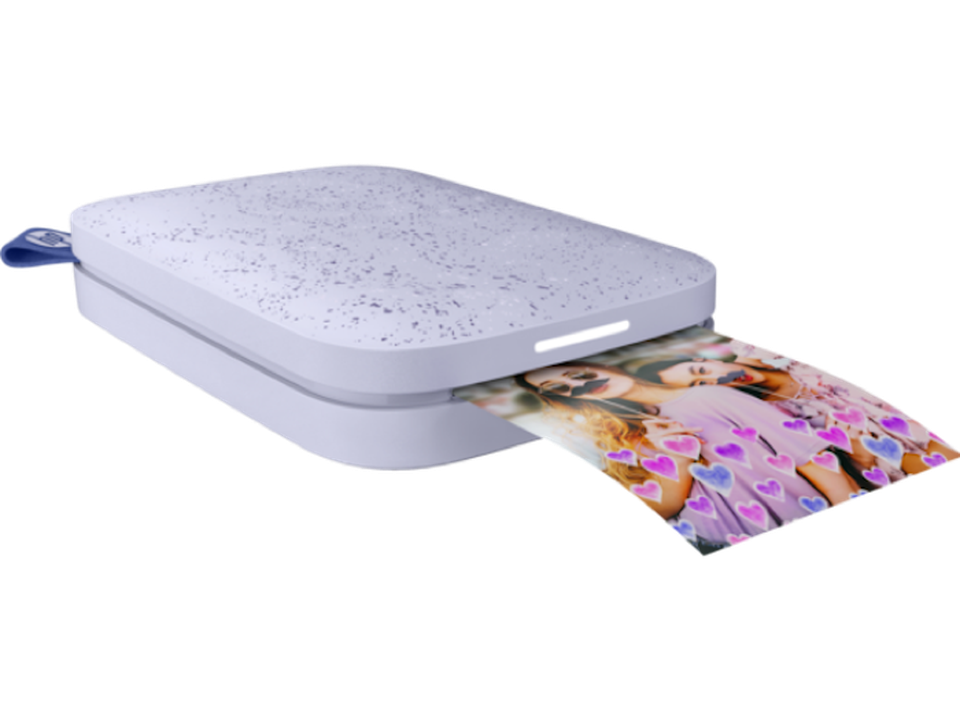 Echoing the stylish consumer approach of the Tango printers, the Sprocket 2nd Edition comes in three “un-HP” colors—Luna, Pearl, and Blush—which will likely appeal to the younger demographic. What’s more, the fashionable Sprocket 2nd Edition models each have different color speckled tops. Frankly, they don’t look like any printer HP has ever manufactured before.

The design of the Sprocket 2nd Edition is refreshingly basic, featuring a print-output slot, a small status light above the front edge, a power button, a LED for battery status, and a tiny reset pinhole. A single battery charge can last for approximately 40 prints. The Sprocket requires no ink cartridges—instead, the HP-designed printer paper releases colors based on heat patterns applied by the device. To load the paper, simply remove the Sprocket’s lid and drop in the paper, print side up. Each paper pack includes a barcode that is scanned by the printer to automatically calibrate the printer properly.

Like the Tango’s smart app, HP’s Sprocket app is a joy to use. Available in Google and Apple iOS formats, the HP Sprocket App automatically finds your Sprocket printer, pairs with it (there is no need to go into your mobile device’s Bluetooth settings), and you’re off to the races. With the Sprocket app, users can perform basic image correction such as cropping and adjusting brightness and color levels. Additionally, users can add text, borders, and stickers—you can even freehand draw on images. 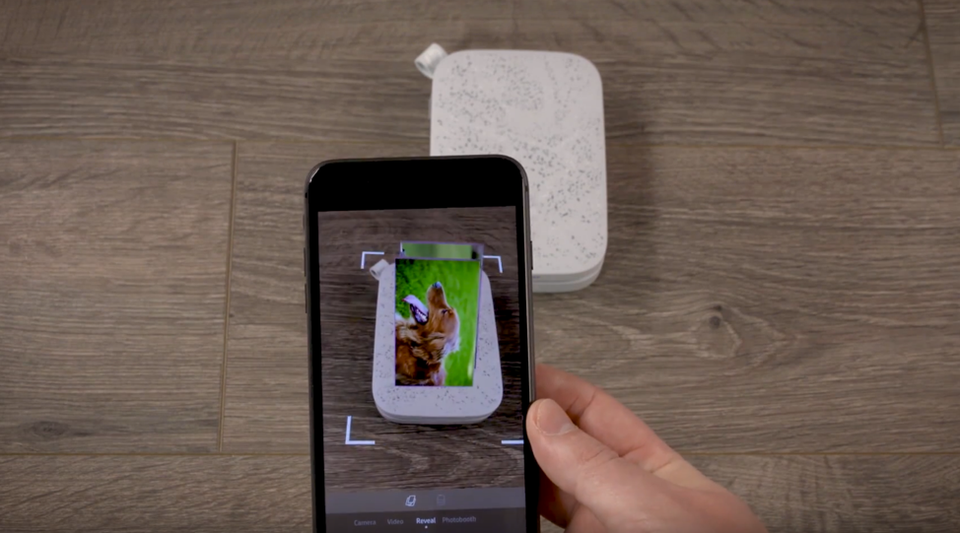 Sprocket also provides an early glimpse of what’s possible with Augmented Reality (AR). The Sprocket app allows you to link printed photos with brief video clips. You can invite others to scan the printed photo with their smartphone’s camera inside the Sprocket app, which then initiates the playing of the video clip on their phone. Another very cool feature of the Sprocket 2nd Edition is that its Bluetooth Low Energy capability enables up to 3 users to access the printer at a time. Additionally, multiple print jobs can be viewed by opening the camera in your smartphone, via the Sprocket app, and holding it over the device. It’s really a cool capability that I’d like to see enabled in other HP printers.

Print image quality is quite good for a such a small, ink cartridge-less printer—certainly suitable for snapshots taken at a party or informal setting. Paper for Sprocket comes in packs of 20 for $9.99, 50 for $24.99, and 100 for $44.99—translating to roughly 45 to 50 cents per snapshot.  Not exactly cheap, but I’m sure many will consider the Sprocket’s convenience worth it.

With ~1.5 million units sold since its initial product launch in 2016, the Sprocket category has been a success for HP.  Not only it tap into consumers’ desire for instant gratification at a party or a family event, It’s further evidence that HP understands the evolving nature of how customers are using mobile devices from a printing usage model standpoint. Again, this is not the same old HP Inc. we’ve grown accustomed to.

According to Rich Phelan, HP’s VP of Home Printing Solutions for the Americas, “The Instant Ink program virtually eliminates the scenario that you run out of ink at the worst time.” The program is supported on a wide range of HP printers, and requires that you permit HP to monitor your ink consumption. A variety of subscription plans based on your forecasted printer usage are offered, including “roll over” options for unused pages.

Phelan also pointed out that HP has been careful to integrate the company’s huge retailer dealer network into the program. This is important, as they’ve been the historic distribution channel for HP ink for years. While retailers would obviously prefer to capture the entire revenue and margin opportunity presented by ink sales, most level-headed retailers understand that it’s better to get whatever compensation they can from participating in the HP Instant Ink program. HP’s program simply has too many benefits for a typical consumer to ignore, and I think more and more people are going to turn to it. Retailers must get on board or miss out on a significant opportunity.

I attended HP’s “Power of Printer” Analyst Meeting at the company’s historic campus in Palo Alto a few weeks ago. I was extremely impressed with the senior leadership team’s overall commitment, openness to feedback, and unwillingness to rest of their laurels in the printer space. I particularly enjoyed the dialogue with Anneliese Olson, HP’s Global Head and GM of Home Printing Solutions. She has championed the innovative changes in HP’s consumer printer business towards a more lifestyle-oriented approach—an approach that is evident in the Tango and Sprocket lineup.

It’s clear that HP understands the seismic changes that smartphone and other mobile devices have caused in the printer space over the past decade. Rather than sitting back, the company is going on the offensive with products that embrace these changes in users’ lifestyles. It’s a strategic approach that is now starting to pay big dividends. It will be interesting to see how HP maintains this momentum over the next year in the consumer smart area, but it’s refreshing to see that a 79-year old company can still teach the industry a few things about the power of innovation.

Posted by Mark Vena in Connected Home, Smart Home Automation , Followed with Comments Off on 3 Offerings That Prove HP’s Printer Business Gets The Smart Home